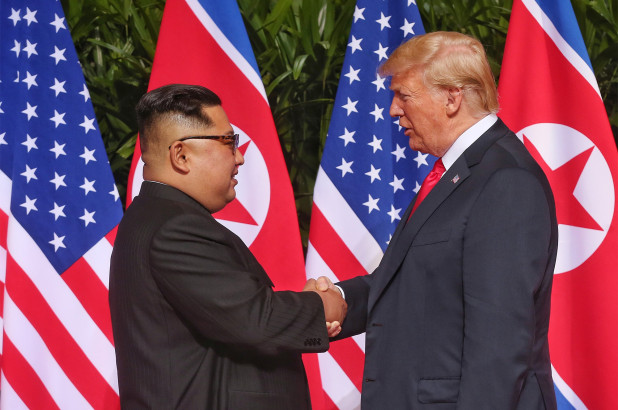 The US President Donald Trump, said the US “would be at war with North Korea” if he had not stepped in and skillfully halted Kim Jong-un’s nuclear ambitions – despite US intelligence leaks suggesting North Korea is still expanding its nuclear arsenal.

President Donald Trump wrote on Twitter today: “Many good conversations with North Korea-it is going well!
“In the meantime, no Rocket Launches or Nuclear Testing in 8 months. All of Asia is thrilled.
“Only the Opposition Party, which includes the Fake News, is complaining. If not for me, we would now be at War with North Korea!” Trump said. Trump’s self-professed peace-keeping comes despite reports emerging Kim Jong-un is still developing nuclear weapons as promised, increased production in nuclear material was discovered across several sites in North Korea.

Following the historic US-North Korea summit last month in Singapore, where president Donald Trump met with Kim,  the US president declared that there was “no nuclear threat from North Korea”.
Although US intelligence assessments suggested the president of North Korea, Kim Jong-un had deceived President Trump, after it was discovered he had been secretly increasing production of enriched uranium, expert Gordan Chang warning the situation to be incontrovertible.

“Those satellite images taken from June 21, nine days after the summit show that they are improving the cooling system of the Yongbyon five-megawatt reactor and that clearly is inconsistent with the notion that they want to give up their weapons” Author Gordan Chang told Fox news. “Also, this most recent report that the North Koreans are building a facility to build more parts for their solid-fuel missiles – that’s also inconsistent with the notion that they are going to give up their weapons.

“So, all of this says one of two things. Either Kim Jong-un deceived President Trump or Kim does not control the military in North Korea. Kim may want to give up his weapons but the generals may not.
“The light water reactor that could be connected to a grid. But the most sensitive reactor is that five-megawatt reactor, Yongbyon. That’s not connected to a grid.

“There are no peaceful uses for the plutonium that comes out of that reactor. So, this is not a question of opinion. “This is just where North Korea’s programme is and they seem to be improving that plutonium reactor and that’s a very very bad sign.”

Chang added that Kim Jong-un may now believe he can “push President Trump around”.
He continued: “They know the schedule of satellites going over North Korea. And, you know, it very may well be that Kim thinks he can push President Trump around.”
Secretary of State Mike Pompeo will head to Pyongyang today to reach an agreement with Kim Jong-un over the country’s denuclearization plan. According to FOX NEWS.

Last weekend, a US delegation met with Kim Jong-un’s officials at the North and South Korean border, to discuss their next steps towards implementing the denuclearization treaty signed by North Korea and the US at the June 12 summit in Singapore.
The White House has expressed its positivity over US and North Korea’s future proceedings, but has not commented on recent US intelligence leaks, which have discovered that Kim Jong-un had been actively expanding his nuclear arsenal.