President Yoweri Museveni has requested tax authorities in Uganda to stop direct taxing of small businesses indicating that they should leave to save their little earnings.

While at the opening ceremony of the 4th African Tax Administration Forum (ATAF) International Conference on tax in Africa at Kampala Serena Hotel, Museveni indicated that people with very small business earn little income which is also spent on feeding for their homes.

“Someone is selling mangoes, roasting meat or gonja and the authorities want to tax them! Let these people earn some money and put it in their pockets,” Museveni implied before adding that these low-income earners will still pay the taxes indirectly.

“I know Ugandans very well. When they earn they go to a bar and will indirectly pay taxes from the beer they drink.”

The ATAF conference is set to run for four days operating under the theme “Innovation-Digitalization and Harnessing Technology to Improve Tax Systems.

Many participants from up to 37 African countries and 11 from outside the continent have graced the conference so far. As well more than 30 tax administrations are also in attendance.

Under its theme, the forum is aimed at exploring the most effective ways of how taxes can be collected in Africa through the elimination of bad vices including tax and other prohibitions to effective collection of taxes.

READ  Ministry of Public Service: We are raising the retirement age for only Doctors

Meanwhile, at the forum, Museveni congratulated ATAF for its 10 years of existence but advised them to stop taxing small-scale businesses and base more on taxing luxurious businesses.

Museveni however, called on Uganda Revenue Authority (URA) to develop digital measures and techniques to help in the proper tax assessment.

Besides, the President credited URA’s role in ensuring the installation of cameras in many factories to monitor the number of goods produced on a daily adding that this will help to reduce on the big numbers of tax evaders in the country.

“The cameras will help, in Uganda, there was a lot of tax evasion and it was a big leakage in terms of numbers and value,” Museveni implied.

Also, Museveni advised tax administrators to more than double their efforts in ensuring proper scanning of cargo at the particular border entry points around the country.

Furthermore, he asked them to look into the imposition of taxes on goods that were imported on zero tax like machinery for production or medicine incase they where produced from within the country. 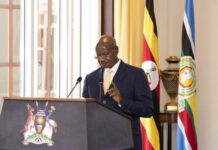