Prof. Ezra Suruma is a Ugandan economist, banker, and academician. He currently serves as the Makerere University Chancellor appointed to the position in January 2016, replacing Prof. Mondo Kagonyera.

Prof. Suruma is a very social man with high integrity and the ability to market Makerere University internationally.

Since 1986, Prof. Suruma has played a significant role in the stabilization, reconstruction, restructuring and management of Uganda’s economy.

He has a passion for economic emancipation and economic justice for the people of Uganda. Prof. Suruma was among the few government officials who opposed the privatization of UCB, which got finalized in 2001.

Ezra Suruma was born on 11 November 1945 (age 76 years), in Kabale District. He attended Fordham University in New York City, United States of America, (USA) from where he obtained a Bachelor of Science in Finance Degree in 1969.

In addition to the above qualifications, Suruma holds a Master’s Degree in computer science and international banking.

Prof. Ezra Suruma worked as a professor of economics and management at Makerere University from September 1979 till March 1981, and at Florida A&M University from April 1981 till July 1981.

From August 1981 till February 1987, Prof. Suruma served as the Director and Head of Department at Coppin State University. Then in 1987, he joined the Bank of Uganda (BoU) Uganda’s Central Bank as the director of research serving in that capacity till 1990.

From 1990 until 1993, Prof. Ezra Suruma served as the deputy governor Bank of Uganda. He left the position to join the Uganda Commercial Bank as its Chairman and Managing Director till 1996.

From August 1998 till January 2005, Prof Suruma served as the Secretary for Economic Affairs at the National Resistance Movement Party (NRM), the ruling party in Uganda from October 2004 till January 2005.

The Professor served as the Secretary of the Commission for Fast Tracking the East African Federation and Director of Economic Affairs for the National Resistance Movement Secretariat.

In 2005, Suruma got appointed as the Minister of Finance, Planning and Economic Development till 16 February 2009, when he was appointed Senior Presidential Advisor on Finance and Economic Planning.

In 2008, Suruma was awarded by the international banking magazine, ‘The Banker’ with the “Best Finance Minister of Africa Award”.

As the Minister of Finance, Suruma was a strong promoter of Uganda’s banking sector and very instrumental in the planning and initiation of Uganda’s microfinance project that aids small farmers and businesses in obtaining low-interest loans.

2008-2009, Prof Suruma served on the Governing Council of the African Export-Import Bank. Then 2007-2009, he was the Vice-Chairman of the steering committee of the panel of African Finance Ministries.

Then in 2016, Prof Ezra Suruma was appointed to serve as Chancellor of Makerere University replacing Prof. Mondo Kagonyera.

Prof. Ezra Suruma before getting appointed to the position of Chancellor Makerere University also served as a Senior Advisor to the President of Uganda on Finance and Economic Planning, from February 16 2009 till 15 January 2016.

Previously, Prof. Suruma was a visiting fellow in Washington D.C at the Brookings Institution, African Growth Division in the United States of America. He got appointed to that position in April 2010.

Also, Prof. Suruma was a shareholder in the National Bank of Commerce, Uganda (NCBU). He was the director of the bank.

NBCU was a small indigenous commercial bank that was shut down on 27th September 2012 by Uganda’s Central Bank.

As a result of its closure, Suruma and other stakeholders opened up UGAFODE Microfinance Limited, a Tier III, deposit-taking microfinance institution, under Bank of Uganda supervision.

He is as well as a distinguished fellow of the Centre for International Governance Innovation based in Canada. In 2014, his book, advancing the Ugandan Economy was published by the Brookings Institution Press.

The eldest child is from his first marriage, with one grandchild. 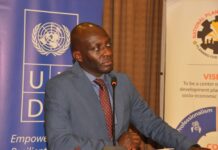 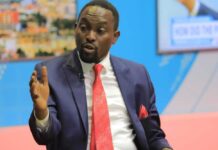 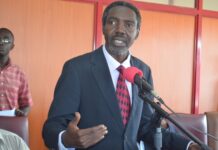