A key rebel group in Sudan have threatened to pull out of peace talks, accusing government forces of bombing its territories, while Sudan government yesterday on Wednesday 16, October 2019, announced a permanent ceasefire in Sudan’s war zones.

In a media briefing, shortly after launching the talks on Monday 14, October 2019, the rebel Sudan People’s Liberation Movement-North (SPLM-N) informed journalists that unless government withdraw from Nuba mountains area, there plan now is to pull out of these peace deals.

Rebel groups say, despite an unofficial ceasefire, government for the last ten days has continued making attacks on its territories.

“General Abdel Fattah al-Burhan has announced a permanent ceasefire to show that the government is committed to peace. The ceasefire is valid from the signing of this declaration,” the council stated.

Talks between the new Sudan Prime Minister, Abdalla Hamdok’s and rebel group delegates who were at war with ousted Sudan President, Omar al-Bashir’s army in Darfur, Blue Nile and the South Kordofan States have been hosted in Juba, South Sudan Capital.

Ever since Sudan’s president, Bashir was ousted in April in a palace coup by the army, an unofficial ceasefire has existed. This followed a countrywide protest held against his decades-old rule and dictatorship in Sudan.

Spokesperson, for Khartoum’s delegation, Mohammed Hassan attributed the fighting to an attack by herders on local merchants.

He adds that the government highly regret the fact that, the fights are happening at a time when people are engaging in the peace talks of the country.

“The government regrets and condemns in the strongest terms these unfortunate events that keep happening in the area, and other parts of the country,” Hassan said.

“We also regret that these events took place at a time when people are entering peace negotiations, and the country and the whole region is united for the cause of peace in Sudan,” Hassan added.

“We are still investigating whether there are attacks in those areas or not, but this will not stop the peace process,” Mathok stated.

Sudan is today under the leadership of the joint civilian-military sovereign council, that’s as well tasked with overseeing role to see that Sudan leadership is handed over to civilians as demanded by the protestors.

READ  Ethiopian Airlines; No One Survived On The Plane Crash

And a new Sudan government that’s tasked with daily affairs of the country is in existence. It’s as well been piloting peace talks with the rebels in Juba, South Sudan’s capital.

The fights going on in this country has badly affected the country’s economy, many have been displaced and many people have lost lives in the process. 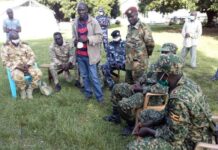 WHO Warns Against Using Hydroxychloroquine in the Treatment of COVID-19