Yesterday, Uganda announced that it will kick start the aerial spraying of the desert locusts on Thursday after procuring aircraft from the neighbouring country Kenya to add up to the motorised and manual methods.

State Minister in charge of Animal Husbandly in the Ministry of Agriculture, Bright Rwamirama informed Parliament that the locusts that entered Uganda are too old and not destructive. And they hope within 14 days they will have eliminated the locusts.

“We have secured one aircraft which will be in Moroto tomorrow and the process of procuring another one hopeful today so that we deal with the locusts. Now we need to know about areas where they have landed, so that in the morning before they fly, they are sprayed and killed,” Rw

“In 14 days we expect them to have laid eggs and have hoppers, we shall be spraying these hoppers and of course they will control them effectively,” Minister Rwamirama added.

However, experts have reiterated that the locusts’ invasion is only beginning and big swarms could be on the way in the next few days if the fight and right control measures are not taken across the border in Kenya.

John Bahana, locusts expert adviser in the Ministry of Agriculture said that the locusts that entered Uganda on Sunday are likely to be in an advanced group mainly mature one that is ready to breed.

This means that over the next few days more locusts’ swarms could be in place.

“Our government since cabinet meeting yesterday advised that another 7bn should be mobilised especially for the aircraft activity,” Stephen Byantwale Tibeijuka, Commissioner Crop Protection said.

11bn shillings were spent on payment of the Desert Locusts Control Organisation of the Eastern Africa, 3.6bn shillings for hiring aircraft, 7bn shillings for chemical logistics protective gear, pumps and surveillance, and 300m shillings paid to UPDF for operations.

Reacting to the expenditure, Bahana says the money so far released may still not be enough to control the locusts’ invasion.

READ  IMF Approves $491.5 Million to Help Uganda in the Fight Against Coronavirus

The desert locusts which have ravaged Kenya, Somalia, Ethiopia and the threat in South Sudan and Uganda are said to have originated from Yemen.

The conflict in places like Yemen and Somalia in combination with the right weather has allowed the locusts to breed and spread all over the region.

Experts confirm that a single swarm is composed of 40 to 80 million desert locusts.

The desert locusts were announced to have entered Uganda, from Kenya through Amudat District and have now spread to other neighbouring districts. 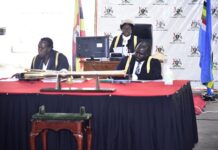