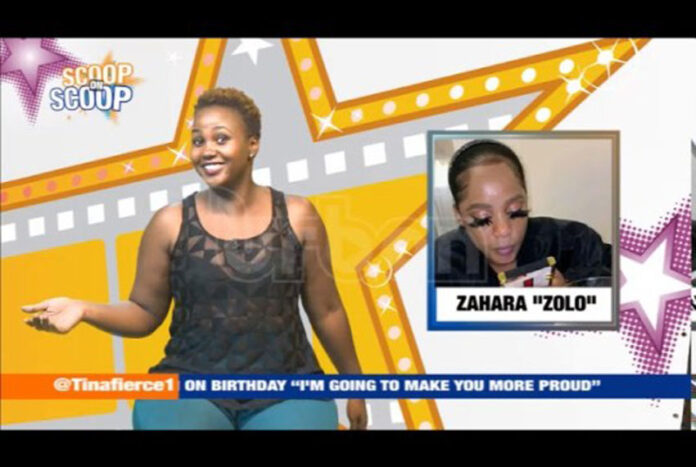 UCC has suspended Urban TV’s scoop on scoop for featuring content that was deemed abusive.

Uganda Communications Commission (UCC) has suspended Urban TV’s scoop on scoop for featuring content that was deemed abusive and opinionated.

In recent weeks, many Ugandans have raised complaints towards the content aired on the Scoop on Scoop show regarding it as very offensive and scandalous.

Notable sources including former television presenter, Sheilah Gashumba recently pinpointed the show host, Tina Fierce as one who is always aiming abuses towards particular individuals without having proper evidence.

Gashumba who took to social media to blast Tina Fierce for her misconduct said that she has been aiming abusive words to her and her other family members.

However, in the wake of events, UCC has suspended the programme in response to several queries raised by several viewers in recent weeks.

About a letter of May 25, 2020, Irene Kaggwa Sewankambo, the UCC Ag. Executive Director said that the Commission first received complaints about Scoop on Scoop in May 2020, and accordingly wrote to Vision Group on May 25, 2020, seeking an explanation, including information on the qualifications of the staff behind it.

However, Vision Group didn’t comply as directed, prompting the UCC Ag. Executive Director to suspend the programme as investigations commence.

According to Ms Sewankambo, the Commission had received complaints to the effect that the content and nature of Scoop on Scoop airing on Urban TV violates the Minimum Broadcasting Standards as enshrined in the Uganda Communications Act 2013.

The complainants had explicitly alleged that during May 2020, Scoop on Scoop featured content that was “abusive, demeaning and inciting; opinionated and not attributed to any reliable source.”

Accordingly, the Commission initiated investigations under sections 5(1)(b), (x) and (j), 31 and 45 of the Uganda Communications Act 2013. To facilitate the investigations, Urban TV was asked to submit a written representation in response to the complaints, and to submit recordings of the programme for the period May 1 – 20, 2020.

Urban TV was also required to provide proof of certification and registration of the producer and the host of the programme, following sections 5 and 27 of the Press and Journalist Act, Cap. 105.

In response, Vision Group wrote to the Commission on May 29, 2020, stating that the complaint had been forwarded to its Human Resource Department for disciplinary proceedings. Vision Group enclosed DVDs of the programme, but neither made representations on the complaint as requested nor provided evidence of the producer and the host’s qualifications.

“Once the process is completed we shall advise on the outcome,” the Vision Group letter stated.

Consequently, and following further complaints about the same programme, the Commission decided to act. In her letter of June 30, 2020, to Vision Group, the UCC Executive Director pointed out that Urban TV had not complied with the Commission’s directives.

“The Commission notes with concern that other than generally stating that Urban TV had subjected the said complaint to your internal processes, your response of May 29, 2020, did not comply with the Commission’s directives as indicated in the letter of May 25,” the Executive Director wrote.

She further noted that in addition to not complying with the Commission’s directives, the TV station had continued to air the same programme, in the same manner, leading to other complaints, including one dated June 24, 2020, from M/s Balondemu & Co. Advocates.

In their complaint, Balondemu & Co. Advocates alleged that Urban TV had in the past three weeks used Scoop on Scoop to broadcast “false, offensive, scandalous and harmful content” against their clients Ali Marcus Moses Sempijja alias God’s Plan and Ms Sheila G. Gashumba.

Meanwhile, the programme is to remain suspended until Urban TV has satisfactorily demonstrated to the Commission that Scoop on Scoop “has sufficient controls to avoid the risk of breaching the Minimum Broadcasting Standards and the rights of other members of the public.”

Besides, the TV station is required to comply with the Commission’s directives issued earlier on May 25, 2020, and to submit recordings of the programme for the period between June 1-26, 2020.

The UCC Executive Director, however, warned that Urban TV risks “other appropriate regulatory sanctions” if the station doesn’t adhere to the aforesaid directives. Sanctions available to the Commission in the event of failure to comply include suspension of the station’s broadcasting license.