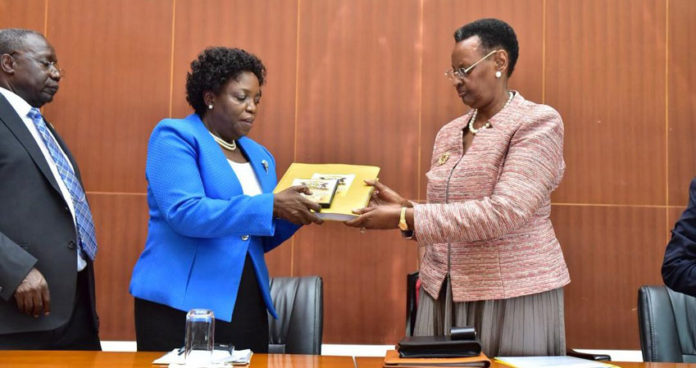 Uganda National Examination Board (UNEB) and Ministry of Education and Sports released the 2018, Uganda Certificate of Education (UCE) results on Thursday the 31 of January at statistics house Kampala.

According to the results the greatest number of students passed in grade four who were 137,058 (54%).

In this case boys performed better than girls indicating 10.2% boys passing in division one compared to 6.6% of the girls. While in division two 18.1% boy and 13.9% for girls.

However, results of 1,825 candidates were withheld over malpractices.

Daniel Odongo the Executive Secretary UNEB said the highest cases of malpractices were mainly in physics, chemistry, biology and mathematics.

Adding that candidates received external aid from their teachers while others did it themselves.

There was gender quality since the gap between male and female candidates continues to lessen. The result indicate that female candidates performed better than their counterparts in English language despite being outshined in other subjects.

Although there has been an overall improvement in performance this year, UNEB reports challenges of teachers integrating the teaching of theory into practical and irrelevant examples given by candidates especially history paper four.

Odongo said that English language was the best performed subject though most candidates found it hard to answer speech questions.

He continued to say that candidates found it easy to write direct questions other than reasoning answers from passages.

In addition, Odongo said that language deficiency in English continued to reflect in other subjects to.

Particularly sciences where some of the candidates failed to use the apparatuses during the practical session including marking, recording and drawing conclusions from the observation.

And Chemistry was the worst subject done attributing it to language deficiencies, cram work and teachers forging questions to candidates in addition to the above.

“Examiners have reported that the causes of these inadequacies lie in the fact that; teachers are not integrating the teaching of theory and the practical and one of the biggest problems in chemistry is also failure of the candidates to write balanced equations.” Odongo said.

Relatedly, Odongo stated that there was an overall improvement in English, Christian Religious Education and physics while in mathematics and Biology the level of distinction also improved.

However, Minister of Education and Sports Janet Kataha Museveni said that improved performance at distinction level in Mathematics and physics will enable learners to take science subject and expand the availability of persons to train as science teachers.

Furthermore, she retaliated the need for parents to play their role in the education of their children, emphasizing that ministry have developed a national teacher policy to improve the quality of the teachers in the country.

“The ministry of Education and Sports is in the process of finding a way to add value to our teachers, in an endeavour to bring the teaching and learning to a level that we are all struggling to see in this country,” Janet Museveni stated.

She continued to say that; “And in line with this, we have formulated the national teacher policy through which the ministry will improve the quality of our teachers and their service in general through retraining and continuous professional development.”

“but also tracking those head teachers and schools that were involved in examination malpractices, in addition to subjecting the culprits to our own internal disciplinary processes as prescribed by the teachers’ code of conduct.”

Meanwhile, the chairperson of UNEB Prof Mary Okwakol says the number of withheld examination results is dropping. She says out of four thousand cases of malpractices that were taken to Court last year, results of over two thousand five hundred forty-eight candidates were cancelled.

“It’s our prayer therefore that all cases currently in courts of law be dealt with expeditiously, so that appropriate punishments are handed down to those convicted. This will act as a deterrent to examination malpractice in future.”

Students who may not have performed well have been guided to seek alternatives for their progress.

Selection exercise for senior five set to take place on 14 & 15while reporting to school on 25th February.