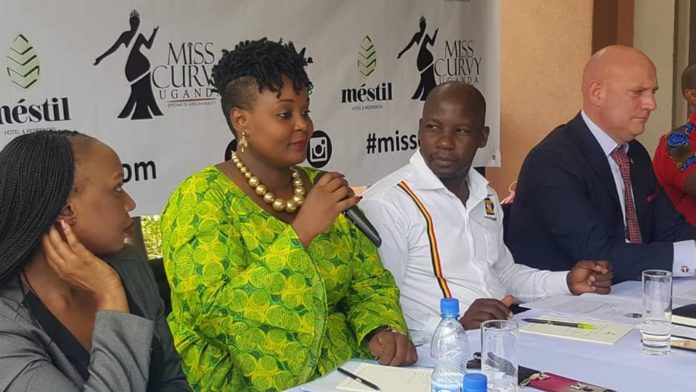 Following the initiative to include curvy and Ugandan women to the list of Uganda’s tourism attraction, unveiled yesterday by Mr. Godfrey Kiwanda the State Minister for Tourism in Kampala, women activists have come out to oppose the project by filing a petition.

Ms Murungi, a women activists says the contest unveiled by Hon Kiwanda demeans women because it objectifies their bodies and degrades their moral values.

Her petition letter to the online audience to underwrite and enable its cancellation reads as follows:

“In Uganda the ministry of Tourism has added “curvy women on the list of “tourism attractions”. They are holding a “miss curvy pageant.” I personally feel attacked. This is degrading of women. In a country where women are grabbled by men while walking on the streets and they have legalised it by making them tourist attractions is not fair.”

“Miss Uganda Curvy” contest seeks to find the most curvaceous woman in Uganda, which Mulungi opposes and now she demands its cancellation and an apology from the Minister to the general public for setting up such an abusive project.

“They are objectifying us and reducing women to nothing. Please sign this petition for ministry of tourism to take down the miss curvy challenge and offer an apology to the public as well.”

Still in the same line, she continued to state that;

“They bought mineral water and soda for the meeting they even had lunch while talking about this brilliant idea. And guess what no one said this is objectification of woman!! Nope, no one said that this is undoing the work of women activists for the past centuries! No one I mean no one thought that this was a stupid mediocre idea. At first I thought the pageant was to create acceptance for plus size women in society but alas Uganda does it again!”

Another woman activist from Bernic Woman said that it’s not the right approach. That is idolising women as objects like how you look at objects that’s how they will look at women.”

“Is the minister going to keep them in a cage such that tourists come and view them. Our bums and hips are not for tourists’ attraction and Why didn’t he arrange one for the men of Uganda as well?”

During the launch Minister Kiwanda reiterated that Uganda is an amazing country naturally gifted with well-formed women, pleasing to the eyes.

Kiwanda proceeded to say that most pageants appreciate pretty faced and slender women letting behind the plus sized women and now it’s time to appreciate their beauty through “Miss Uganda Curvy”.

Adding that tourism is not only for wild animals alone but people and other things as well and its only Uganda where you find this kind of women.

“We have naturally endowed nice looking women that are amazing to look at. Why don’t we use these people as strategy to promote our tourism industry? “Mr Kiwanda posed as he pointed towards some of the curvy women as he addressed the media.

In this campaign, Ministry of Tourism officials will be telling the world numerous background stories of different shapes and curves of Ugandan beauties and their cultures in particular.