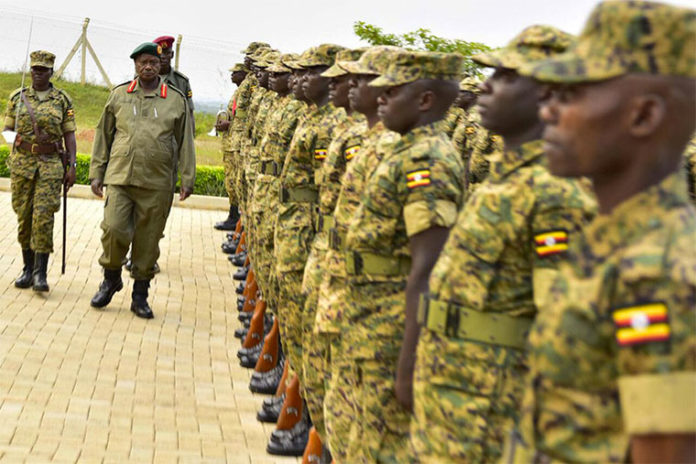 Once the National Resistance Army (NRA) and now the Uganda People’s Defence Forces (UPDF), yesterday the 6 of February marked 38yrs in service as Uganda’s Army. They celebrated what they call Tarehe Sita in Kitgum district. Speaking at the Tarehe Sita celebrations in Kitgum, president Museveni warned politicians against using the land crisis in the upper region of Uganda to advance their political ambitions.

He says Apaa failed to solve its land crisis because of poor leadership and cheap popularity exercised by the leaders of Mad and Acholi people.

“On the issue of Apaa, this is problem entirely caused by leaders, who want cheap popularity at the expense of the people. But I listened very carefully to those issues and we are going to get a solution. Leaders should stop trying to get optimistic politics out of the people’s issues.”

President Museveni went ahead to warn officers against bad behaviours stating that, there role is to maintain peace and order but not causing disturbances to the locals.

A way from that, President Museveni also issued a warning to people who want to destabilise the peace enjoyed by Ugandans asserting that government is keeping a watch and is ready to deal with such characters.

“When I read Intelligent reports I feel pity for Africans. Anybody who thinks they can disturb Uganda; they are destroying themselves. For us we never attack anybody who is innocent but if you are foolish and think you can destabilise Uganda, you will destroy yourself.”

UPDF’s Chief of Defence Forces (CDF) Gen. David Muhoozi says the work of the UPDF is to restore public confidence and address the Motor of the Philosophy of pan Africanism.

“Restoration of the confidence of the people in determining and preserving their destiny. And promoting the philosophy of Pan-Africanism for our strategic social economic and security interests.”

Former Army Commander Maj. Gen Mugisha Muntu asked the Army leadership to delink UPDF from the ruling National Resistance Movement. Stating that NRM should stop thinking that that UPDF is part of them.

“Because UPDF is an institution of the State and NRM is a party which is in government today, tomorrow it will be out. Therefore, the way it operates it must be revised and the earlier they start delinking it, the better.”

He says if UPDF is not delinked from NRM, Uganda may be exposed to serious reactions as it was with the past Armies in the near future.

“My hope and I believe majority of Ugandans wants to see UPDF succeed beyond a regime.”

Relatedly, Muntu commended the level of professionalism the Army operates in, that has opened many of the service men and women to the outside world, especially when it comes to Education.