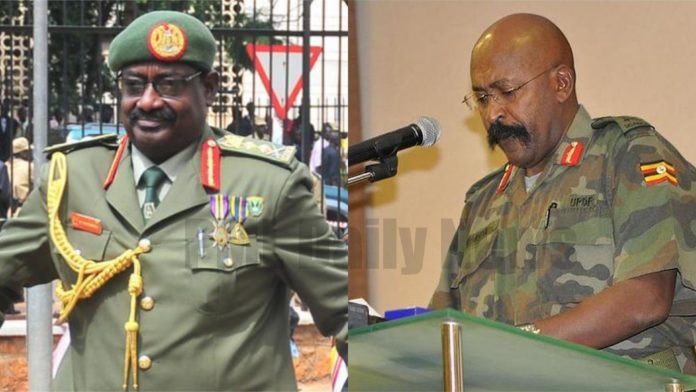 Former Coordinator of intelligence services Gen David Sejjusa aka Tinyefuza has been cleared to retire from the army, UPDF spokesperson Lt. Col. Deo Akiiki has confirmed.

He declined to comment on other developments surrounding the retirement, “Gen Tinyefuza will be among the officers to retire from the army, that is what I can say,” he said.
According to a source privy to anonymity, Sejusa’s retirement has been ordered by president Museveni after his long quest to retire home. He is expected to be included on the list of retiring officers in 2019.

Upon falling out with army leadership and citing corruption issues over the Lord Resistance Movement war, Gen. Sejusa tendered in his resignation letter in 1996 however, his plea has always been turned down by the top officers. He sued government for forcefully retaining in the army and subsequently won the case in High Court but the state appealed the case in Court of Appeal that overturned the decision of High Court.

The bush war general who has always been against injustice in Museveni’s government, in 2016 secured a High court affirmation for him to be retired from the army since he was not serving soldier assigned nor executing any of the force’s duties.

Sejusa was in 2016 arrested and charged in General court martial over two offences of participating in political activities, insubordinate behavior, and two counts of conduct prejudicial to good order, and discipline expected from an army officer. He later acquitted and set free.

General David Sejusa (born 13 November 1954 as David Tinyefuza) decorated with the DAMU Medal and the Luweero Triangle Medal is a Ugandan lawyer, military officer and politician. He was the coordinator of intelligence services and a senior presidential adviser to President of Uganda Yoweri Museveni. He served as army commander and also a member of High Command UPDF, the UPDF defense council and a member of parliament representing the Uganda People’s Defence Force. He had a falling out with Museveni and formed the Freedom and Unity Front in exile in the United Kingdom following being charged for plotting a coup where he has been allegedly planning anti-government activities by the Museveni government.

Tinyefuza attended Nyakasura High School. He holds the degree of Bachelor of Laws Honours (LLB) and Master of Laws (LLM) from Makerere University. He also attended the Law Development Centre for the Diploma in Legal Practice where he left after a clerkship for cadet training in Tanzania. He was also a student leader at Makerere University. He has obtained the senior command qualifications of PSC from the Uganda Senior Command and Staff College at Kimaka, Jinja, Uganda. He also holds a Certificate in Information Technology from an institution in Canada. He also attended the Police Cadet Course in Tanzania and Senior Command Strategic Course.

He is married to Juliet Tinyefuza.

On 17 February 2012, David Tinyefuza officially changed his name to David Sejusa. He said that Sejusa is a family name that is also reflected on some of his academic documents but that he had abandoned it “around secondary school level” but that he would re-claim as “everybody back home” refers to him as such. He added: “There is nothing in reverting to my original name. It is comrades like you who didn’t know it was my name but those elder comrades have always referred to me as such. And I suggest that from today you quote me as Gen. David Sejusa.”

The Sejusa name is a Luganda rendering that is loosely translated as “I have no regrets;” it also has the same meaning in the Ankole rendition of Tinyefuza, which he said was a reason to take a new identity.

Prior to 1981, David Tinyefuza was a policeman with the Uganda Police Force serving as Assistant Superintendent of Police. In 1981, he became a combatant in the Uganda Bush War between the Uganda National Liberation Army (UNLA) of Milton Obote and the National Resistance Army (NRA) of Yoweri Museveni, from 1981 until 1986. For a period of 10 years following the victory of the NRA in 1986, he served as a member of the National Resistance Army Council (NRAC) and the National Executive Committee (NEC). Between 1989 and 1992, he served as Minister of State for Defense. In 1993, he was appointed Presidential Adviser on Peace and Security, serving in that capacity until 1997. He was appointed Senior Presidential Adviser and Coordinator of Intelligence in 2005, a position he held until 2013.

Politics
The party was founded in November 2013 with an official announcement later made in London, United Kingdom, where former General David Sejusa was in exile. Sejusa said of President Yoweri Museveni: “He’s had enough time. He can leave and go, and we start a new process of national healing. And we are organising ourselves, we are establishing a constitutional rule which he destroyed.” Sejusa denied seeking the presidency and said that it was “a waste of time” to run against Museveni within the structures of the current system. Two months earlier, Museveni challenged Sejusa to try to overthrow him, but added that whoever uses violence would be stopped. “If Sejusa wants to use force, let him come.” In turn, Sejusa responded to questions of whether he would use force to bring change and said: “It’s not so much that we want to do so. But if he continues to unleash terror on the population ours will be self defence.”

Following a rift with the establishment in May 2013 about Ugandan President Yoweri Museveni’s son, Muhoozi Kainerugaba, over allegation of nepotism and that he would eventually simply replace his father as president, a motion Kainerugaba denied, he founded the Freedom and Unity Front. Sejusa had earlier called on Ugandans to “build alternative capacity” and remove Museveni. He added, the week following his departure as a MP representing the military,that “no one should imagine that Museveni will be removed through elections.”

Ivan Koreta (born 15 October 1955) is a Ugandan military officer, diplomat and legislator. He is a lieutenant general in the Uganda People’s Defence Forces(UPDF) and a representative for the armed forces in the Parliament of Uganda; where he serves as a member of the Public Accounts Committee and the Committee on Presidential Affairs.

Koreta has been a member of the armed forces since 1981 and most recently served as the deputy chief of defence forces, the second-highest position in the UPDF, from 2005 to 2013. He also served from 2006 up until 2009 as the chairman of the General Court Martial, the second-highest military court in Uganda.