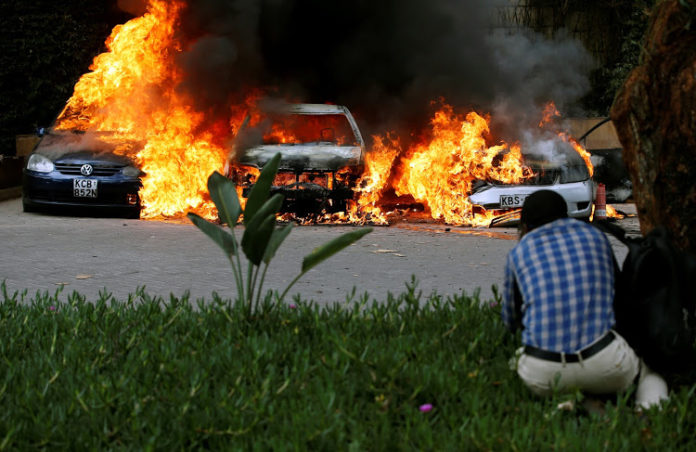 According to the Associated press (AFP) photographer he saw a pair of vehicles burning and sending back smoke outside Dusit Hotel and bodies falling off the tables on a restaurant terrace in the complex.

The explosion transpired at the DusitD2 Hotel compound, which included; restaurant and some office buildings, a 101-room hotel housing local and international companies according to AFP.

AFP pictures taken from the scene indicated burning vehicles outside the Hotel and many people convoyed from the Hotel.

In 2013 Al-Shabaab attacked Nairobi shopping mall in Westgate and according to the SITE Intelligence Group which monitors Jihad’s activities the same group claims responsibility of the attack.

AFP reporters present at the scene stated that they saw some wounded people being removed but still the number remains unknown.

They say soon after the explosions repeated gun shots were heard for about 4 hours.

While, Simon Crump an eye witness and a survivor working at the complex narrated that after several explosions had occurred the already scared workers closed themselves in their offices for safety.

The attack arrived one day after Nairobi Court had finalised all the necessary trial steps of the three suspected attackers on the Nairobi’s Westgate Mall.

The Westgate Mall attack happened in 2013 and claimed 67 lives committed by the Al-Shabaab terrorists.