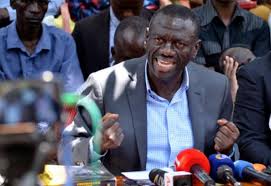 Forum for Democratic Change (FDC) is demanding for an apology from a group that attacked Dr Besigye or rather they fire back.

The swift turn followed Saturday’s incident where Dr Kiiza Besigye, former presidential contestant and former FDC president was attacked by a group of angry youth outside Masengere building in Mengo, after concluding his radio talk show at CBS radio.

Shouting the people power slogan, and demanding Besigye’s exit from the local radio station. These angry youths attempted to assault Besigye but were luckily rescued by his allies.

“So I can only ask our colleagues if they are not State sponsored to offer an apology. So, they don’t give us an extra work to strain FDC and Dr Kizza Besigye’s supporters who ordinarily and legitimately want to seek revenge.”

Ssemujju Nganda claims he has classified information on who the attackers were and their master minders. He says they risk exposing them if they don’t refrain being used to divert the party from its political mission.

“We want to devote our energy and time towards fighting the dictatorship. Because that’s why all of us are being held captive. So, we don’t want to be involved in secondary wars with people ordinarily who belong to the same side. So, my appeal to them is that they should refrain, they should offer an apology or else they may allow those who may want to revenge and give us an extra burden to stop them.”

Robert Kyagulanyi, better known as Bobi Wine, the Kyadondo East legislator and people power movement leader responded to the accusations saying that it’s an abuse for FDC to carry all the blame on him or any other party arguing that all they need regardless of their political differences is liberating Uganda.

“It would be very immoral for them to reduce this struggle to just me or any political player because it’s not about us, this is about the people of Uganda okay! Of course it’s very important that we focus our efforts to the liberation of this country regardless of any perceived or really differences.”

The attackers indicated loyalty to Kyadondo East legislator Robert Kyagulanyi, as they made loud shouts in people power slogan.

FDC have instituted an internal investigation into the attack of their leader, Dr Kizza Besigye, and afterwards publically announce the findings. And as for now they are down until the investigation closes.

“We want to find out the motives of those people, then we act accordingly. We will first find out who they are working for,” one of the FDC member stated.