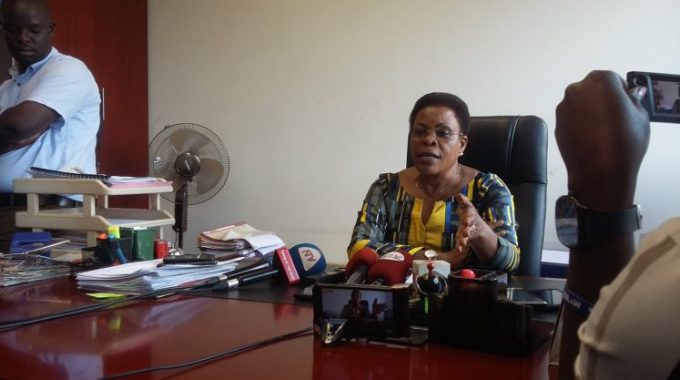 Last week, a leaflet from an unknown person was making rounds on social media naming a number of big shots that are slated to be killed over unknown reasons. Speaking to journalists at her office on Thursday, Betty Kamya confirmed seeing the leaflet before admitting that she fears for her life.

“I saw the list on which I am among the people to be killed and I am bothered by the leaflet since there are many murders in Kampala now days,” Betty Kamya said in the latest Uganda news before adding that she has taken the necessary precautionary measures to avoid being victim.

“I no longer put myself in unnecessary risks. As a Christian, I pray to God for protection and I also don’t move at night. I return home early on top of the security I have,” added Betty Kamya

The Kampala Minister however said if there was chance, she would meet with the assailants who want her dead so as to seek for a pardon adding that they ought to reveal all that she did wrong to them.

“I wish they could state the reason for wanting me dead. If there is something I did and is displeasing to them, they should make it known and if possible I can apologize.”

Asked whether she regrets crossing from the opposition to join government, Betty Kamya said she has no regrets because even in the opposition their goal was to get a chance to serve the public.

Betty Kamya was however quick to add that President Museveni’s detractors are trying to cause havoc in the country so as to discredit him on security as one of his biggest achievements for the country.

When contacted, the deputy police spokesperson, Patrick Onyango said he could neither confirm nor deny whether the minister had reported to police about the death threats.

“If she has not yet made any formal complaint, she knows the appropriate administrative channels to use to ensure her security is beefed up,” Onyango said

“We would request her to do so in case she has not yet.”

A few weeks ago, police said they had received intelligence reports indicating imminent attacks on VIPs in various parts of the country before, during and immediately after independence celebrations.

In a statement by the police spokesperson Emilian Kayima, the attacks could be in form of assassinations or in form of terror attacks.

“The police have intelligence that some criminal elements within and outside the country may want to commit heinous crimes against members of the public especially VIPs like Hon. Ministers, MPs, senior executives and security personnel during or after October 9 when Uganda celebrates her independence, ”read in part the  press statement by Kayima released on September 29.

“This is to inform the country that security is prepared to decisively fight these crimes as we continue to monitor their activities.”

The VIPs and any other persons were in the statement warned to be watchful of vehicles or motorcycles following them while driving and take appropriate action like alerting police, parking in populated places or where there is security along highways.

They were also warned against routines especially in terms of movements, timings and places they usually visit like shopping centers.

In all these cases, the victims have been attacked while in their vehicles before being sprayed with several rounds of bullets.

President Museveni recently announced a move to re-introduce Local Defense Units to a tune of 24000 personnel as a temporary solution to the increasing spate of criminality especially murders.

He said these would help sort the situation as government continues to install cctv cameras.

Addressing the country about the state of affairs on September 9, Museveni said the problem of urban crime is becoming big and is worrying many people in the country.

The president explained that government will deploy both crime preventers who will be first vetted by their LC1 leaders and reserve force to be recruited into LDUs that man towns and will help fight insecurity and urban crime.

“Kampala has 1000 villages and we shall fill them with man power and our guns will answer these criminals. We shall see which guns have more effect.”

This means that on average, each village in Kampala will have 24 LDU guards.

Museveni who sounded incensed said government has been forced to deploy the Luweero bush war methods to fight urban crime.

“These idiots (criminals) don’t know the elephants they are fighting with. They have done it repeatedly and I have ordered for mobilization of 24,000 LDUs. We are also going to recall reserves to man towns,” he noted.

He insisted that the police are still using old methods to detect and fight crime but said the new method of using CCTV cameras will help fight crime in urban areas where it has not been easy.

Speaking at the commissioning of CCTV cameras on Tuesday at Nateete Police station, Museveni said the game was over for criminals, especially murders after the installation of the cameras.

“What we needed were eyes, ears and a nose to sense them. It is what the cameras will do. Once we see these criminals, we shall get them. Dealing with urban criminals is now going to be simpler. It is one of the smallest problems I have solved in last 58 years,” Museveni said on Tuesday.

“The NRM has solved so many problems and this one (criminality) is very easy. What we need are the eyes, ears and nose to detect them. They (CCTV cameras) are now here. We have solutions to all these problems.”

Installation of CCTV cameras in major areas of the city kicked off recently and according to police, a total of 3233 cameras on 1248 sites will be installed in Kampala Metropolitan Area which is part of the program to install 5552 all over the country.