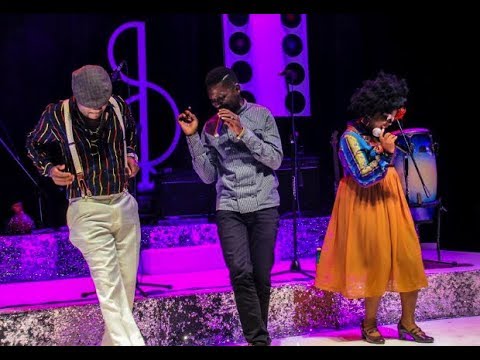 At around 8:00 pm on Saturday 5 May, singer Bobi wine the current Member of Parliament for Kyandodo East Constituency together with his long time wife Barbra Itungo Kyagulanyi arrived at Kampala Serena Hotel for the long waited Tugende Mu Kikadde season 2, an annual music show that celebrates Old great music in Uganda. He was accompanied by his other friend and singer Nubian li and blogger Arshburg Katto on the table.

The couple excited the fans and was seen at several occasions going to the stage. And on recognition, the Official Deejay of the memorable night DJ Alberto of BBS television played one of Bobi wine’s first hit songs in early 2000 called Akagoma which left the audience demanding for his performance.

This came true when the MC of the Night Andrew Kyamagero called the specioza singer to do his long time song. The singer didn’t hesitate and turned up to the stage and performed strictly two minutes and left the stage. Apart from Bobi wine, singers like his elder brother Eddy Yawe who recently quit Afrigo band performed. Others included Lord Fred Ssebata and wife, Sam and Sophie Gombya, Afrigo band and the energetic Chance Nalubega who turned out to be the performer of the night.

In attendance was Singers Angella Kalule, Lydia Jasmine, Nubian Li, media personalities like Flavia Tumusiime,NTV’s Daggy Nice, NBS TV’s Anita Fabiola among others. The show run until late and was reffered to as the most ever organized music event in Uganda from out and inside.

It was organized by Sprout Africa and sponsored by NBS TV, Capital Fm, Beat Fm, Nile special and Scweppes among others.