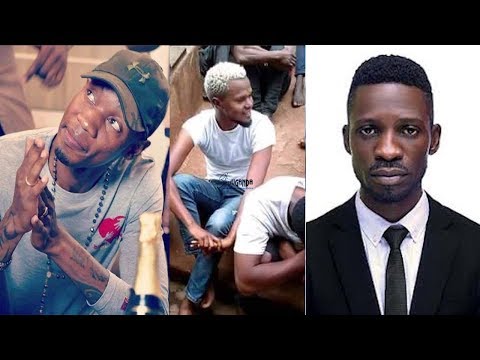 Popular musician and Kyadondo East Member of Parliament Robert Kyagulanyi Ssentamu aka Bobi wine has come out and released a statement after the arrest of his die-hard and popular blogger Arshburg Kato who was arrested by socialite Brian White with the help of the Police. He was detained at Katwe police station and later taken to Luzira Prison.

Here is the full statement from Bobi Wine.

Many friends have been asking me about the arrest and detention of my friend and renown blogger Ashburg Kato. Yes, Ashburg was arrested and incarcerated on some flimsy charges related to his work on Ghetto TV. Although Police are trying to project his detention as based on criminal defamation, I want to make it clear that this is not about PROSECUTION- it is about PERSECUTION.

The police unlawfully kept him at Katwe Police Station for 5 days before he was produced in court and remanded to Luzira prison where he is currently being held.

When I went with lawyers to check on him and demand for his release, the Police officers at Katwe were scared to release him and one of them confided in me that there were orders from above not to release him. The state believes, rather naively that arresting bloggers and other internet activists will break their firmness and scare away others. They are trying to use Ashburg to send that message.

I’ve been in touch with him and encouraged him to remain firm and strong. In totalitarian regimes like ours, being jailed for whatever reason is to be expected. But I know that despite these imprisonments and torture, we shall overcome some day.

Together with several human rights lawyers, we are currently doing our part to secure his release. But even as we use these legal measures, I encourage all bloggers and other internet users to #StandWithAshburg.

As we have seen this regime do, they begin with one and eventually reach everyone. Let us not look at this case as Ashburg’s case. This is an attack against free speech and the use of the internet. Today it is Ashburg, tomorrow it will be another.