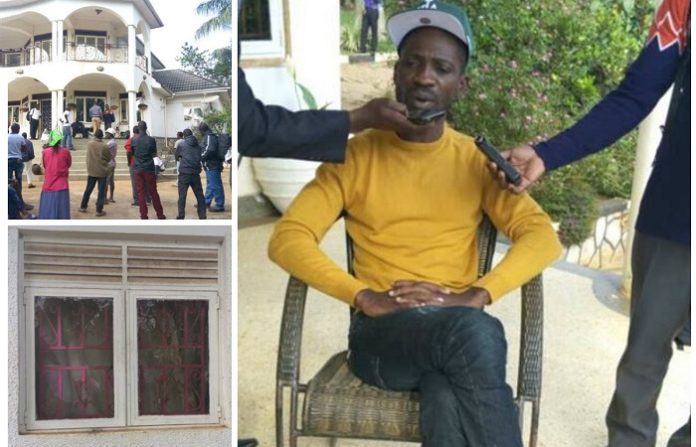 Heavy Police deployment was seen at Magere, as police officers blocked the Kyadondo East Legislator Robert Kyagulanyi, stage name Bobi Wine, from conducting his planned protests, a day after he declared a national wide protests over police brutality and continuous blockage of his concerts.

In this regard, Police spent a bigger part of the day engaging in running battles with angry and violent crowds who wanted their legislator freed.

Musician turned politician Bobi Wine, woke up prepared to file a petition before the Inspector General of Police, over the continued disruption of his music shows by the Uganda police.

But as he approached his entrance, armed police officers, had already camped all around his house and deployed to all routes leading to his house. His attempts to petition the IGP was then frustrated.

Kasangati police commanded by Jafri Magyenzi, could not allow him move even an inch beyond his entrance. They then ordered him to go back to his house or else face arrest.

“You either go back to your house or we arrest you.”

After the argument between the two parties, that’s Bobi Wine’s lawyers and the police, police lost temper and tried to arrest Bobi Wine.

“He’s not resisting your orders but he would like to know if he’s under arrest or not and what offence has he committed?” Wine’s lawyers questioned.

But in the process of attempting to arrest him, Bobi Wine’s body guards succeeded in skipping him away from police arrest.

Politicians present at a time of event condemned the act saying the precedence set will now become part of the daily operations of the Uganda police.

They said they are being fair to the president, by telling him be obedient to the law, “you are tested too.”

However, residents of Magere after landing on the news at Bobi Wine’s house turned violent and angry, ran to the streets and set up fire in different areas of Magere, resulting into running battles with the police. Which lasted for some time.

Police blockage and house arrest of some political leaders which centred much at Kasangati, targeting Dr Kiiza Besigye, has now shifted to Magere at musician’s house Bobi Wine turned politician.