A number of suspects involved in the Bank of Uganda (BoU) scandal have moved to three (3) after the director currency, Charles Malinga was included on the charge sheet.

Malinga joins the other two suspects Fred Vito Wanyama and Francis Kakeeto who are on remand since last week after he was charged with abuse of office at the Anti-Corruption Court in Kololo.

The two were charged at Anti- Corruption Court at Kololo on accusations of inclusion of extra cargo onto BoU chartered plane. charges they both denied.

While Malinga is accused of delegating tasks to his juniors meant for him. He was supposed to collect BoU cargo but instead, he directed his juniors Kakeeto and Wanyama who failed to deliver as expected.

Charles Malinga director of currency and an officer in charge of printing and minting money was later released on a cash bail of Shs40 million.

They appeared before the Anti-Corruption Court in Kampala. The three took plea again owing to the amendment of the charge sheet to include the new suspect.

Bail is a constitutional right, the defence team decided to exercise this right on behalf of their clients the three accused persons.

In his verdict, the presiding Magistrate Albert Assimwe, released the suspects on cash bail amidst a packed courtroom.

The sureties to Wanyama and Kakeeto were bonded at 100 million shillings each not cash.

Dr Malinga’a high profile sureties included the Bank Manager and members of parliament bonded at 200m each not cash.

They were asked to present their land titles as security. The presiding magistrate also urged prosecution to speed up cases as a matter of national importance.

“We are disappointed that justice has become very very expensive in Uganda,” Ndugwa said.

He, however, expressed his discontentment with the way the court handled the case.

“I would have been very happy if I heard big people in the Bank also appearing somewhere and also depositing may be 100 million Shillings somewhere. But when you go to these mediocre people and tell them to deposit 30m in cash, the requirements are unfair.” 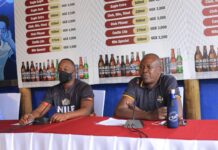