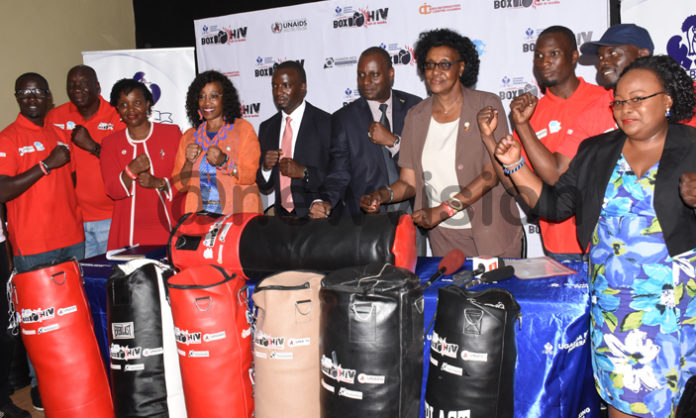 This week The Uganda Aids Commission, UNAIDS, Aids information center alongside Uganda boxing federation launched a campaign to use boxing in eradicating HIV/AIDS scourge in Uganda and to promote a Uganda free of HIV Aids epidemic.

A campaign termed as BOX HIV OUT OF UGANDA is to be implemented by the Infectious Disease Institute Makerere, Uganda Aids Commission and the Aids information center in partnership with Uganda Boxing Federation (UBF) to join hands in the fight against HIV/AIDS prevalence in Uganda.

HIV AIDS is one the most feared diseases worldwide which has claimed lives of millions both here in Uganda and other countries and its cure has not been yet discovered. This campaign aims at sensitizing Ugandans to go for texting and if found positive or infected to start taking ARVs.

According to Mr. Moses Muhangi, UBF president said that this partnership will help them educate their boxers to live a healthy life and “Those who are affected will receive treatment in time”. He stated.

During this campaign Club officials, game teachers, athletes, referees and coaches will be trained first and afterwards they will train others under them, said Muhangi.

UNAID Executive Director Karusa Kiragu said that they want to use boxing as a mobilizing tool in fighting HIV prevalence in sports field in Uganda since many people participate and support the boxing activivties.

“We are taking this fight to Schools and sports disciplines including rugby and foot ball to sensitize people; Kiragu observed.

However, UNAID alongside other partners donated gloves and punching bags to all boxing clubs through the Uganda Boxing Federation president Moses Muhangi