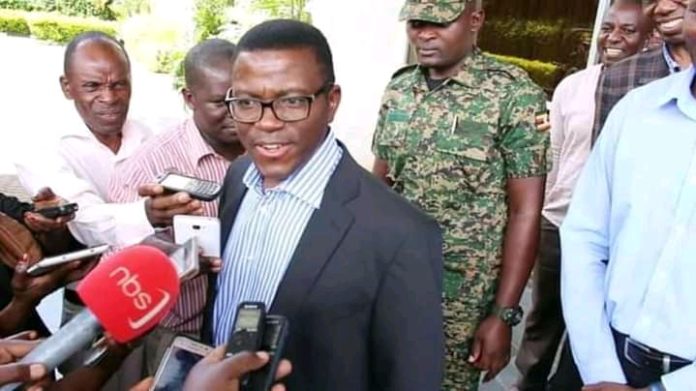 Chaos As Government Blocks Katikiro Mayiga To Tour Kooki;  By 6:00am police had already made heavy deployment around Brovad hotel in Masaka town blocking the Katikiro of Buganda Charles Peter Mayiga from accessing Kooki county, a legitimate and recognized county of Buganda Kingdom. According to police they detected insecurity from where Mayiga was going and they have to safe guard him from any danger.

This comes after 9 years ever since chaos broke out in 2009 in Kooki Rakai when they denied the Kabaka of Buganda Ronald Muwenda Mutebi II to visit his county due to the disagreement with the Kamuswaga of Kooki who claims that Kooki is an independent kingdom and therefore they make decisions on who visits them. In the chaos, hundreds of Baganda protesting to allow their king to access Kooki were killed in Cold blood. 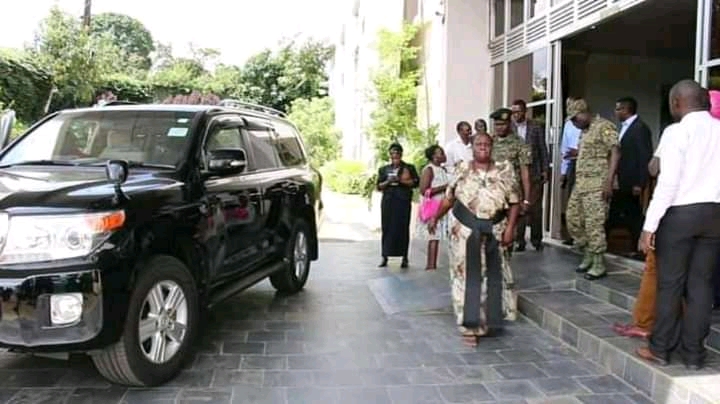 After 9 years, the Katikiro of Buganda Charles Peter Mayiga today morning attempted to visit Kooki to visit St. Bernard S.S Manya a school whose S.3 dormitory was burnt and later tour coffee farmers under his campaign of Buganda becoming the best coffee producing regions in Uganda was blocked by the police force over fear of chaos in the region.

Buganda royalists started up a demonstration in Masaka town at around 11:00am after getting to know that Mayiga has been blocked. Preceded to St. Bernard S.S Manya administration and ordered the school to return everything Kamuswaga had offered claiming that, he is behind the blockage. But police came in and calmed down the situation.

However, while at Brovad hotel in Masaka town the police, Katikiro and some Buganda leaders from Mengo underwent a closed meeting where they spent several hours. And at around 12:53pm Mayiga was allowed to proceed to Kooki County under tight security.

Regional police commander Latif Zaake speaking to journalists said that the blockage was as a result of demonstration by the Kooki people protesting Katikiro’s visit.

Later at around 2:00pm Katikiro Mayiga arrived at St. Bernard S.S Manya welcomed by the school administration. He toured the burnt dormitory and also talked to one of the survivors Kiweewa, afterwards he talked to students and parents who had gathered at the school and delivered Kabaka’s message.

This contained 100 iron sheets and 100 bags of cement to help reconstruct the burnt boys’ dormitory. He later proceeded to Kyalulangira where he met Zubairi Ziwa a coffee farmer and toured his farmer as well.

In his message to Kooki people Mayiga encouraged them to work hard for sustainability, he said if Kooki people work hard they will develop. “We don’t want Kooki to lag behind while other parts of Buganda are rising up,” observed Mayiga.

From there Mayiga proceeded to Kooki town where he was welcomed by the biggest crowd (Bakooki) led by their chairman Mugabi. “Thank you for coming you are most welcome! Stay well with us, and as u go back we pray that you reach home safely”, Mugabi’s welcoming message to the Buganda’s Katikiro Charles Peter Mayiga.

In the same Kooki people appealed to Mayiga to help them access clean water and construct health facilities in Kooki county.

However, Mayiga encouraged them to work hard, press on and stop being lazy. They should not wait for rains neither good soils, he advised them to learn from Mr. Ziwa who grows coffee on a hill and is doing well.

During Kamuswaga’s coronation in May held at Byakabanda play ground Kooki in may 2018, Buganda’s official did not attend. This followed Kabaka’s birth day celebrations in April held at Villa Maria Buddu when Kamuswaga also turned down his invitation.

Before this day the Kooki cabinet held a meeting on Sunday 25th chaired by Haji Iddi Kiwanuka where he expressed his discomfort upon hearing that Mayiga was to visit Kooki.

Hours before Mayiga visit Kooki’s spokes person Stanley Ndawula said “I have had rumors that the Buganda premier is set to visit Kooki but I’m not sure whether they are true. We don’t entertain such ways because we are an institution which ought to be respected”, Kiwanuka speaking.

Besides, Kooki spokes person Stanley Ndawula says; “We are okay with Mayiga visiting the Kabaka’s subjects living in Kooki, but he should respect the protocol of the institution where they live.” He further noted that today they have been blocked by security but next time Kooki people themselves shall not allow such kind of disrespect”, Kiwanuka’s point of view.

He added that Buganda should not forget the history between the two and that Kooki chiefdom deserves respect.