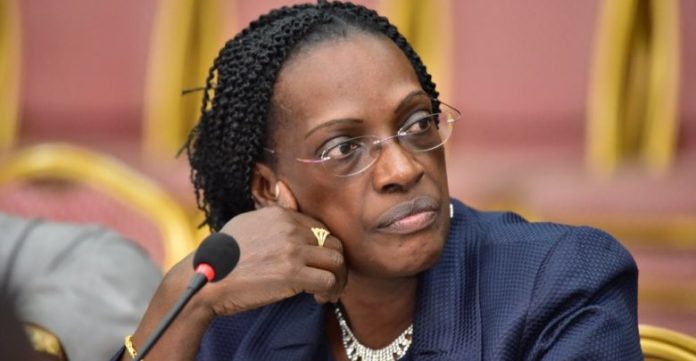 Former Executive Director Banks supervisions at the Bank of Uganda Justine Bagyenda has told MPs on the Committee on Commissions, Statutory Authorities and state Enterprise that the documents she took from BoU were personal.

Bagyenda admitted that she sneaked out documents as being revealed in the CCTV footage that was assessed by the committee but she contested taking Bank of Uganda documents.

Although arguments inspired on whether the footage should be played publically or not for fear of compromising the security of the Central Bank, this did not stop the committee from assessing the bank footage.

“We can skip the room with money but we cannot do away with it simply because the security personnel are telling us that this is sensitive because he was also insensitive on what was happening in his docket.” One of the committee members reasoning.

The committee also continued to say that; for the bank to want to hide their weakness, hiding information and documents is really unprofessional.

In the footage presented to the committee by the director security BoU Milton Opio in March 4th 2018 Justine Bagyenda was perspicuously noted sneaking out unidentified document in hiding with the help of her body guard and driver as seen in the CCTV footage.

Bagyenda was perspicuously noted accessing bank of Uganda premises through the back entrance avoiding security scanners.

However, when tasked to explain the kind of document she sneaked out Bagyenda failed to provide an answer during the discussion on the matter by the committee.

She however, told the committee that the documents in question were her personal items.

“All things I took out as I said yesterday were personal.”

Bagyenda failed to give an explanation when she was asked about the banks security policies.

“I was not aware of the policy but I want to add that when my visitors came in I was not the one who opened the gate. The security personnel opened the gate that was clearance enough,” Bagyenda explaining.

In her answer provided she said that; “I wasn’t aware of security clearance.”

Meanwhile, security Milton Opio told the committee that Bagyenda took advantage of her position to skip security guidelines to sneak out the documents.

He further stated that they don’t have this clearance on record regarding the incident.

However, this was not the first time Justine Bagyenda by passed security arrangements it had become a habit.

Bagyenda sneaked in her relatives without security check up through the back entrance to access the bank premises in February 2018.

The CCTV video perspicuously manifested Bagyenda opening the gate for her driver which stormed COSASE because it was a weekend.

The committee has tasked the head of security to bring the entire raw footage on what materialised on that fateful day.

“We look forward to see un edited recording and once he does that we will have to look at it in her presence,” Katuntu asserted.