Proposed Electrol Reforms: Court summons Bobi Wine and Besigye over the petition that they are holding illegal political activities

The court’s decision follows a petition filed by Adens Lutaro Ntare’s lawyers from New Mark Advocates in which he accused Besigye and Bobi Wine for establishing and running illegal political organisations.

The petition said according to article 72(2) of the Constitution of Uganda, activities like mobilising political campaigns, registration of members are reserved for only registered political parties.

This happened last week after the Kyadondo east Member of parliament, Robert Kyagulanyi alias Bobi Wine announced the People Power coordinating team and a day later, Dr Kizza Besigye also resurrected his cabinet announcing that his Kasangati residence would serve as a State House for his People’s Government.

And now following the Friday petition by Ntare’s lawyers, the court has issued a summon for the two parties.

READ  Ministry of Health: 4 isolated foreigners are safe and free from coronavirus

Ntare in his petition wants the Constitutional Court to stop what he called unlawful activities carried out by the two political groups that are People’s Government and People Power Movement.

“People have chosen to go against the constitution and start operating their political groupings against the will and covenant of the people that are enshrined in the 1995 Constitution,” Ntare’s lawyer said.

Nevertheless, the two political groups said they have not received any official court document.

“All that we’ve seen is staff going on Social Media but we’ve not been summoned formerly. So until then, it’s another of those rumours,” Joel Ssenyonyi People Power spokesperson said.

“We’ve not been summoned officially, as far as I know, we have not seen any document concerning that petition,” Ingrid Turinawe, National Political Mobiliser FDC said.

Turinawe says Ntale is president Yoweri Kaguta Museveni’s representative playing his dirty works, adding that all their activities are constitutional and they are ready to defend themselves before the court if at all they receive an official court summons.

People Power and the People’s Government will have to file a response within ten days following the petition. 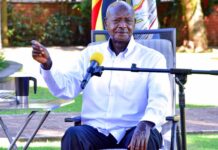