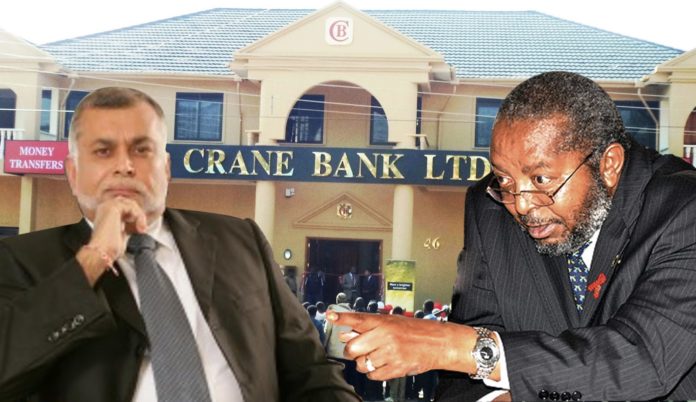 Bank of Uganda officials while appearing before the Parliament’s Commission, Statutory Authorities and State Enterprise (COSASE) on Tuesday 11th of December failed to reason why Crane Bank was closed and sold off.

The officials could not provide the necessary figures as proof of the Crane Bank significantly undercapitalised, as alleged among reasons following its closure.

The latest news reaching Flash Uganda Media indicates that Bank of Uganda officials this week failed to present the correct figures and documents to defend their claim against Crane Bank of ‘significantly undercapitalised’ at the time of its closure.

Emmanuel Tumusiime Mutebile, the current Governor Bank of Uganda earlier on Tuesday told the committee that he doesn’t have figures of Crane Banks undercapitalisation, which raised questions and anger among the committee members asking why Central Bank had to close Crane Bank without defined figures in record.

“I don’t have figures for its undercapitalisation but I know what we demanded to put in place”, Mutebile told the committee members.

On the other hand, Ms. Justine Bagyenda the former Director of Commercial Banks Supervision told the committee that Crane Bank required an extra capital to remain in business. On its failure to raise these funds, the BOU had no other option but close the embattled bank.

“On 1st July 2016 Bank of Uganda instructed Crane Bank to inject additional capital to at least 32 billion shillings by September 15th 2016 to rectify the significantly undercapitalised, undercapitalisation, and progressively inject an additional capital of at least 56b in order to store the Bank to capital adequacy by 31st October 2016”, Bagyenda explaining to the committee.

Ms. Bagyenda also added that they closed the Bank simply because it was significantly undercapitalised and its capital levels had fallen below the statutory requirement as stipulated by the financial institutions act.

However, committee also discovered many loopholes in the Central Bank management indicating that directors of some commercial Banks serving as legal advisers to the central Bank.

Which according to the committee may upset independent decisions made by the Central Bank.

Also in defence against the matter Ms Bagyenda told the committee that they always task them to declare their conflicts of interests before their appointment.

Former director at Bank of Uganda Mr. Kitimbo Mugwanya who was appointed statutory manager for the sale of Crane Bank, confessed that he mishandled the calculations on how the money that was injected in Crane Bank was computed. This however, prompted the chairperson of the committee Abdul Katuntu to adjourn the meeting until Wednesday.

Finally, he asked BOU officials to go back and reconcile their figures before returning to the committee on Wednesday.