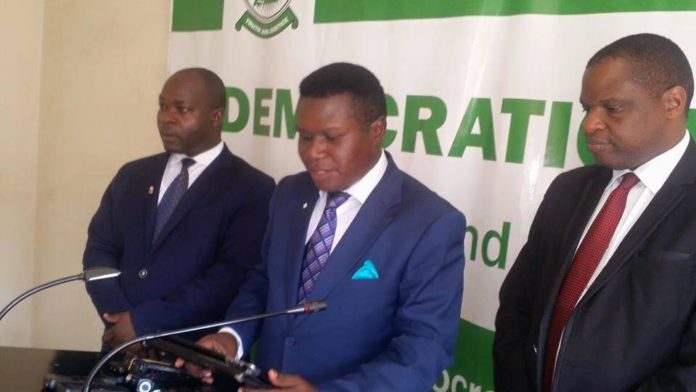 The Democratic Party has rejected a video provided by UPDF showing tormentors of Yusuf Kawooya pleading guilty and charged in the army court saying, they have evidence proving that the video is fake.

On Friday, Daniel Senkungu, Moses Rwamwenge, one only identified as Omara and two others were reported to have appeared before the Unit Disciplinary Committee (UDC) sitting at the CMI headquarters in Mbuya.

The presiding chairman Tom Kabuye read out the charge of conduct prejudicial to good order and discipline to the accused and they pleaded guilty to the charges.

The Democratic Party leadership has however rejected the trial as sham meant to deceive the public.

DP President Norbert Mao claims that the party has evidence the trial was staged. He says, “When you look at the physique of the men in that video, those are not the men who tormented Yusuf Kawoya.”

Mao argues that the suspects need to be paraded before the public in court like the suspects of the Arua by-election chaos were in Gulu as they stood for trial.

The DP president added that if UPDF fails to bring the suspects to book, the party will take action.

Mao has also asked the UPDF to immediately release Yusuf Kawooya or they will take to the streets to demonstrate.

But UPDF deputy spokesperson Lt. Col. Deo Akiiki Asiimwe dismisses DP’s concerns. Akiiki contends that, ‘’We have the real suspects, it is incumbent upon DP to produce the suspects they claim to know.’’

Kawooya was abducted on Thursday and beaten before being bundled in a waiting van, registration number UAF 325S, which sped off. The incident happened at the junction between Colville Street and Portal Avenue, just adjacent to Theatre Labonita and Christ the King Church in Kampala.

Uganda Receives 864,000 COVID-19 Vaccines From Covax, Will Distribute on March 10