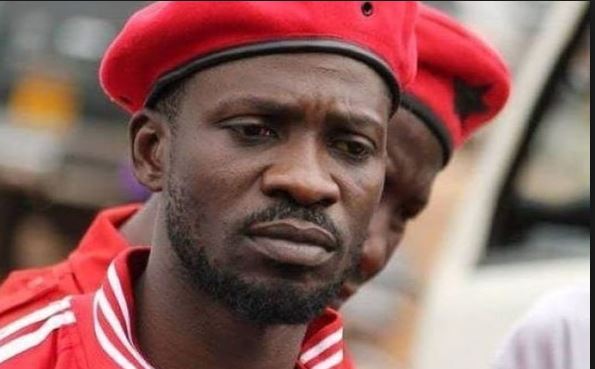 Christopher Ssentongo, has given out his part of the story, after police broke into the Toyota Prado TX to arrest the Kyadondo East Legislator, Robert Kyagulanyi commonly known as Bobi Wine, on Monday afternoon.

The Toyotaa Prado TX vehicle that police forced their way into belonged to the Mityana MP Francis Zaake. After Bobi Wine’s arrest, he was then driven to his home in Magere.

Addressing the press, Ssentogo, the driver of Zaake’s car revealed that there were several unsuccessful ventures made by police, before breaking the car with the pistol to make away through.

“When we tried to enter Busaabala, they blocked us. They started spraying pepper into the car fans but lukily enough, the air conditioners filtered the air and we were not harmed by the spray.”

According to Ssentongo, police failed in all their attempts and after they decided to force their way into the car. They used pistols to break the car screen.

“They used their pistols to break the passenger door screen where Bobi was seated. They then sprayed inside with pepper forcing Bobi Wine out.”

After arresting him, Ssentongo says Wine was then hurried a way but they did not harm him (driver).

He adds that police acts are “inhumane” they aim at humans who are completely innocent. Something Ssentongo greatly condemned.

“Driving is a passion to many of us. We had done nothing and it was wrong for police to spray us,” Ssentongo says.

AIGP, Asuman Mugyenyi, the police Director in charge of operations, addressed the organisers of the Busaabala concert, Abbey Musinguzi of A bitex promotions, in a letter dated April 19, 2019 stating that they have blocked the concert because Bobi Wine and the management failed to follow security guidelines in the past shows.

“This is to inform you that despite the elaborate and clear guidelines well stipulated in our correspondence and the previous meeting we had regarding the preparations, the manner, conduct, characteristics and security demands from your side, previous concerts have fallen short of agreed positions.”

Mugyenyi says; the show can only be allowed to happen if police set up public security mechanisms “robust” to protect the people present at the concert.

Bobi Wine, responding to police’s argument via social media says he will not hold back and watch his rights being infringed by security.

“This brings the total number of our blocked concerts across the city to 124 since October, 2017, we shall not resist this impunity,” Bobi Wine stating.