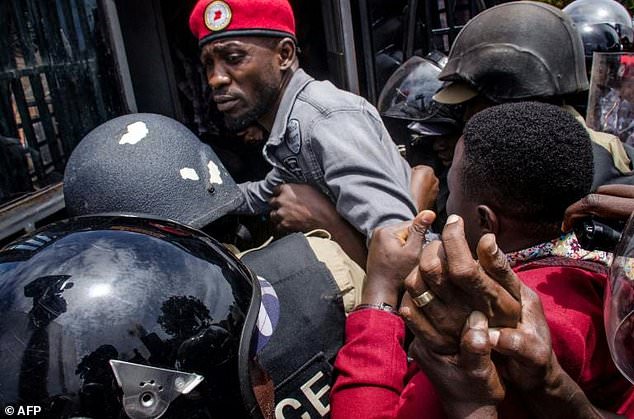 Yet another bad day for the Kyadondo East Legislator Robert Kyagulanyi Ssentemu aka Bobi Wine, as police used Pistol to force their way into his vehicle where he was at that time, to force his arrest hours after he was blocked from accessing his One Love Beach Busaabala on Easter Monday.

In this event, police and his supporters engaged themselves in a running battles characterised by teargas and live bullets to push away the angry crowd that was throwing stones in protest of police undertakings.

Police was attempting to block Bobi Wine from accessing his One Love Busaabala, where he was to hold his Easter Monday music show.

In April 2011, police for the first time in the country used pepper spray on FDC’s Dr Kizza Besigye to block him from reaching his destination.

In the surrounding environment, cameras saw police officers attempting to shield what police had done to the vehicle where Kyagulanyi was. But the inside picture clearly showed what happened at the time as police forced their way into the Bobi Wine’s vehicle.

This forced police to release water cannons, teargas and live bullets to push away the angry supporters.

The crowds trailed him right from his home in Magere, after declaring that he will be addressing the press at Busaabala.

AIGP Asuman Mugyenyi, the police director in charge of operations, addressed the organisers of the Busaabala concert, Abbey Musinguzi of Abtex promotions, in a letter dated April 19, 2019 stating that they have blocked the concert because Bobi Wine and the management failed to follow security guidelines in the past shows.

“This is to inform you that despite the elaborate and clear guidelines well stipulated in our correspondence and the previous meetings we had regarding the preparations, the manner, conduct, characteristics and security demands from your side, previous concerts have fallen short of agreed positions.”

He continued to say that: “on the background, Uganda police therefore will not be able to secure your planned concerts and will not risk them to be carried out in an unsecure environment.”

According to police, the show can only be allowed to happen if police sets up public security mechanisms “robust” to protect both parties who are involved in the concert.

“Respective territorial police commanders are by copy of this letter informed accordingly to make sure there is compliance.”

However, Bobi Wine responding to police’s argument on his social media pages, says he will not hold back and watch his rights being infringed by security.

“This brings the total number of our blocked concert across the city to 124 since October, 2017, we shall not resist this impunity,” Bobi Wine said.