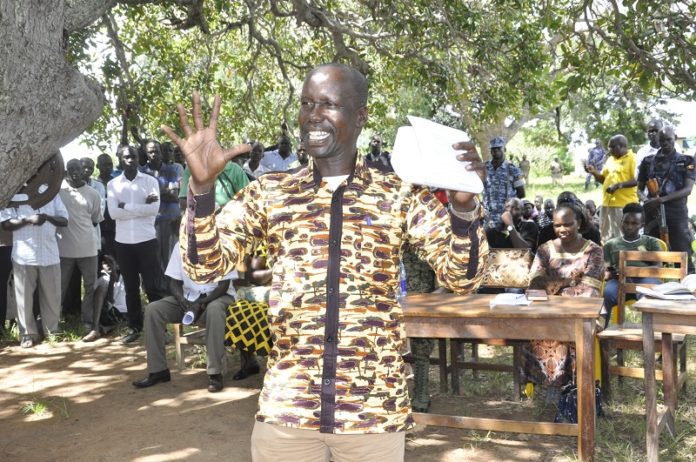 A law maker has turned against his own laws to allegedly defile and balloon a 17 year old girl whom he took to his Kampala home to work as a maid. Joseph Andrew Koluo, Toroma County MP in Katakwi district, Teso sub region has been accused of luring a 17 year old Jane Anyait into sex that resulted into pregnancy.

According to a highly placed source, Koluo in 2017 hired the services of Anyait from his constituency to stay with him as a maid in his Kampala home in Kasubi. According to a local newspaper, Anyait hails from Angodingod Sub County in Katakwi district.

It is said that during their stay in Kampala, MP Koluo allegedly started luring the 17year old minor into sex romps which resulted into a pregnancy.

“When Koluo’s wife got to know about Koluo’s closeness with the maid, she decided to send her back to the village to her parents,” a source said.

Reports indicate that Anyait’s parents only identified as Steven Opolot and Frances Aguti and other relatives confronted Koluo to explain why he descended on the P.4 dropout and impregnated her. Unconfirmed reports indicate that Koluo pledged to support the girl and the family and the two parties agreed to settle the matter out of legal procedures.

According to Section 129(1) of the Penal Code, anybody who engages into sex with a minor (less than 18years) commits a felony and liable to life imprisonment.

It is said that Koluo also infected Anyait with a deadly disease.

When contacted, Koluo denied all the allegations saying it is politically motivated and that it is being orchestrated by his political opponents to blackmail him. He however acknowledges that he knows Anyait and that she has been staying with her as a maid until she decided to go to the village.

“I picked that girl from the village to come and stay with me here[in Kampala] and while here, I decided to take her to a technical school to learn tailoring and indeed I even acquired for her all the necessary equipment. But later, she started ignoring house chores and concentrated more on her tailoring which annoyed my wife and decided that she returns to the village,” Kolou said.

He denies ever getting involved in a sexual affair with Anyait. Sources say that Koluo agreed to pay a fine of Shs10m but only paid Shs3m to the relatives of the girl. The matter was reportedly taken to CPS, Katakwi but they were advised to settle the matter at home with the MP.