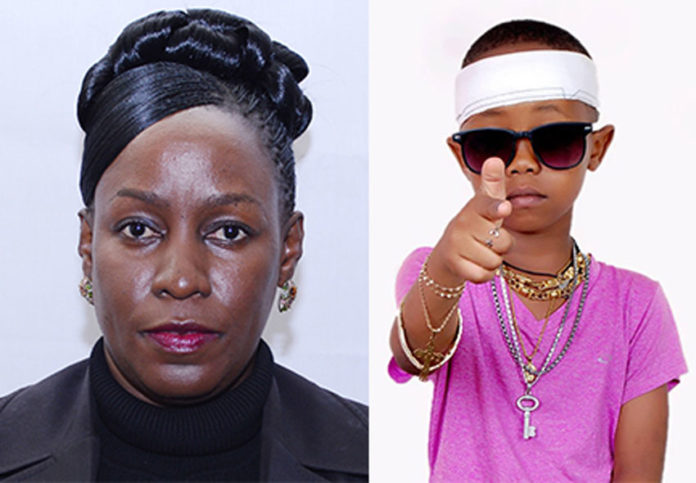 Florence Nakiwala Kiyingi, State Minister for Youth and Children Affairs, has offered part of her time to meet the emerging seven-year-old city rapper, Partrick Ssenyonjo, best known as Fresh Kid, for a counselling session as regards to his early career and his refusal to attend school.

Though Fresh Kid has stormed the music industry with great music and stage performances. Nakiwala says it contravenes the Children Act and other related Uganda laws.

She adds, government is to test Fresh Kid, to find out whether he has not been subjected to drugs or whether his brain growth is not damaged by the music performances stress.

“We have to examine the boy to see if he is ready to do such a business because such people may be under the influence of drugs which is dangerous. So, that age cannot be able to tell what is right or wrong.”

According to Nakiwala, this seven-year-old rapper’s activity is illegal, in a media interview earlier.

“The law does not allow such a child to work or to be employed for money because he cannot have a Tax Identification Number to pay taxes. So, until the law is amended, my hands are tied and I can only partner to counsel him, and make sure he’s in school.”

However, Nakiwala has not yet met Fresh Kid and his managers, but the meeting is arranged.

“Not yet, but I am going to meet them and they are free to come, there’s an arrangement and that meeting will be about counselling the boy.”

A call Nakiwala refused to attend to, she says unless his parents present this young rapper’s work plan indicating the time he spends at school, work, leisure and rest. She will not change her decision on the boy’s engagements, because he’s still young and all decisions are made by his parents.

But by press time, we had not yet filed Fresh Kid’s Family and Manager’s views as regard to the ban imposed on their person’s performances.

Mr Francis Kamoga, Fresh Kid’s manager, earlier on issued a statement saying that the Infant Singer is not singing for money and proceeded to state that Fresh Kid attends school which is highly doubted by the public including his former manager.

Ugandan laws regarding childhood crimes says the child in Fresh Kid’s age bracket (7yrs) are only given counsel when found guilty. While those aged 12yrs and beyond are taken to remand homes.