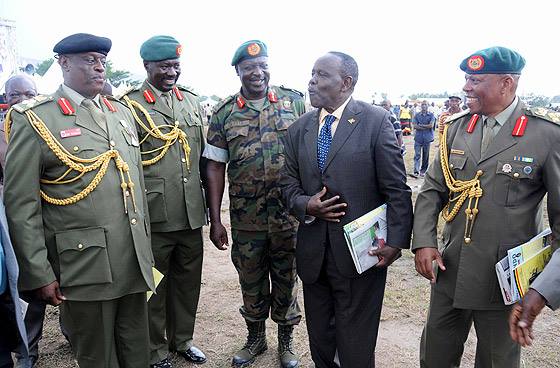 Other human right Activists in the country are calling on Maj Gen Matayo Kyaligonza to quit his position as the Uganda’s Ambassador to Burundi. The swift turn followed the Sunday incident where he and his two body guards assaulted a police officer.

“I hope that Kyaligonza resigns with immediate effect his position. Two- he should be arrested executed for the violence and assault he and his team occasioned on Sargent Namaganda,” Patrick Tumwine Human Rights coordinator stated.

“We hope that the appointing authority is going to immediately discharge Maj Gen Kyaligonza of his duties as Ambassador because he’s not fit to represent this country abroad.”

Relatedly, politicians have also expressed their distress in the assault saying it indicates culture of impunity that is prevailing in Uganda.

“It’s quite unfortunate, that he doesn’t respect our officers. It’s unfortunate and I want to condemn it,” Franca Akello Woman MP Agago District stated.

While Francis Mwijukye MP Buhweju (FDC) said: “It’s good we see his condemnation of the junior officers, the escorts but the principle participated.”

“It has become increasingly difficult for ordinary citizens to obey the law when those whose duty it is to enforce the law, are taking the law into their hands,” Hon Ssemujju Nganda said.

“She was disrespected; she does not want us to see her in her pain. But we know that deep inside her she’s hurting. This is not what she signed up for to be beaten.”

UPDF Army have been advised by Human rights lawyers to restore the lost confidence and trust from the public by exercising justice.

“They put drastic measures that if someone has violated the law, the person should actually be brought to book and the public should be made aware that this person has actually been punished,” Shamim Mulende, a lawyer obseved.

Livingstone Ssewanyana, the Executive Director of Foundation for Human Rights Initiatives (FHRI) called for justice as far as the matter is concerned.

“Kyaligonza was involved therefore the law must equally apply to him. We should not see a selective application of the law. He should be held accountable, disciplinary actions should be taken by the highest appointing officer.”

Now, the question remains will the reactions from the general public, result into a disciplinary action? against the soldier Maj Gen Kyaligonza and his body guards.

Uganda People’s Defence Forces (UPDF) has always been commended by President Yoweri Kaguta Museveni as a disciplined Army compared to the past Armies like the Uganda National Liberation Army (UNLA) under president Milton Obote and Tito Okello and the Uganda Army under president Iddi Amin Dada.

The Sunday incident involving Rt Maj Gen Matayo Kyaligonza and his two Army guards in which they allegedly assaulted a traffic officer in Seeta Mukono left some people asking oneself whether the previous Army characters are bouncing back.

Maj Gen Kyaligonza is Uganda’s Ambassador to Burundi and the ruling NRM vice chairman for western Uganda as well.

This is not the first time Maj Gen Matayo Kyaligonza, the former Member of Parliament for Muhanguzi County and hero of bush war that ushered President Museveni into power is caught up in controversy.

Maj Gen Kyaligonza has been accused several times of insulting his spouse among other controversies including the following.

In many occasions according to police sources Maj Gen Kyaligonza has files of assault cases against police officers.

In 1989, Maj Gen Kyaligonza, then a Brig allegedly assaulted a traffic police officer one Tumusiime and was lowered to Col, just three years after president Museveni had taken over power.

In 2015, Kyaligonza sounded dramatic when president Museveni’s son in law, Odreke Rwabwogo, declared his interests in contesting for the NRM vice chairperson seat for western Uganda in which Kyaligonza was also a contestant. But later on Rwabwogo opted out.

Kyaligonza claimed that it was un fair for president not to leave one of his own challenge and unsettles an NRM historical.

In August 2010, Gen Kyaligonza was accused of grabbing 64 heads of cattle from Geoffrey Rukundo and George Mugoha residents of Kyatamba village in Dwaniro Kibuga District.

And in 2017, the two failed to get justice after filing a petition before Hon Rebecca Kadaga the Speaker of Parliament.

She claimed that Kyaligonza wrongfully channelled a water channel in resident’s homes that created discomfort and exposing them to diseases.

After Spark TV broadcasted the story it’s said; Dan Kizza who raised the concern was allegedly battered by Kyaligonza’s body guards and sustained injuries as a result. But later admitted to health clinic for treatment.

Sargent Esther Namaganda’s vexations started when she ordered Gen Kyaligonza’s driver to stop, after making unlawful U-turn on the road.