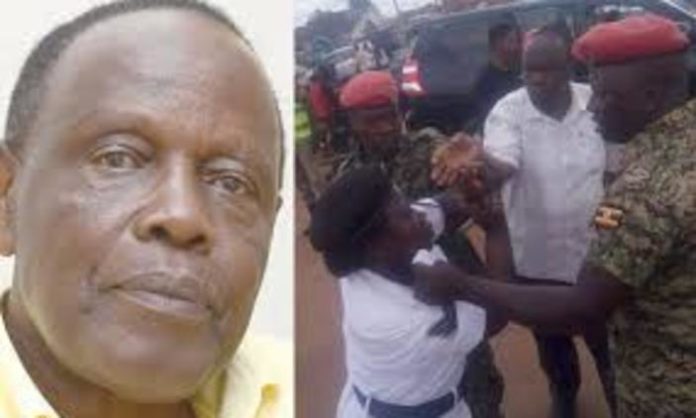 Embattled Rt Maj Gen Matayo Kyaligonza aired out his view on the incident that happened on Sunday on his way to Mukono District around Kireka along Kampala Jinja high way.

Uganda’s envoy to Burundi denied the accusations of him assaulting a traffic officer insisting that may be the office could be the one in the wrong.

“On Jinja road we were stopped, when coming from Kampala we were stopped, then I tell these Army officers let us go back. Now all the time you have seen even Museveni can tell you he takes a wrong direction with the escort cars when he finds a traffic jam. Me I tell these people make a U-turn let’s go back. Now the policeman instead of stopping the other one coming so that I pass and we continue, she stops the vehicle. My car was knocked behind, and the soldiers jumped out and started asking the Askari why are you stopping vehicles on the middle of the road? And now the tax man took off after learning that he had knocked a car which was escorted by soldiers,” Maj Gen Kyaligonza speaking to NTV on a Telephone interview.

He however, proceeded to say that: “Now what do you expect these poor soldiers, who went looking for the training, he finished then told your job is to guard. What’s so special about a soldier Kyaligonza’s escort handling the collar of a police. I was in the car then I saw and people were shouting ‘Twakalaba’ and others saying ‘Twalonda Bubi’ so, Twalonda bubi you need the soldier or you need the police woman. That’s the “Karacasa” of human being of Uganda. Now supposing [1]somebody has hit a stone, would the soldier not have shot back? I am not a priest nor a Bishop.”

Relatedly, the Speaker of parliament Rebecca Alitwala Kadaga wants to see the traffic police officer, Esther Namaganda, who was assaulted by Maj Gen Matayo Kyaligonza and his two body guards on Sunday while on his way to Mukono.

Hon Kadaga made the statement while receiving a petition from women activists who wants an end to female harassment in the country.

Maj Gen Matayo Kyaligonza and his two body guards’ footage that trended on social media seeing them assaulting a traffic police officer in Seeta Mukono have continued to register reactions from different party’s country wide, including women activists Joining condemnation of the action.

During the meeting with the Activists, Kadaga said Esther Namaganda should be promoted for the resilience she portrayed while executing her duties in a very hard and trying moments she faced on Sunday.

“We ask the Inspector General of police to promote that lady because despite the pressure she refused and insisted on doing her job according to the law. So, I think really she’s one of those who should be applauded.”