GNL Zamba added that whenever Big Tril raps, he hears everything while other rappers wrap up their punch lines under forced American accents

As many people take it differently, one man who is more proud of Big Tril’s success is his mentor and CEO of Baboon Forest, GNL Zamba. Zamba has been praising Big Tril ever since he released Parte after Parte.

In the Big Tril Instagram post, the Koi Koi hitmaker is seen cheering him with fire emojis in the comments section. On these grounds, GNL Zamba has come out to talk about Big Tril’s growth in the industry and how his song has become a generation anthem.

“Of course I am so proud of Tril; it is his ‘Trildome’ come. When I first signed him, everyone told me he wouldn’t make it but I saw something in him that was undeniable and now the whole world can witness it. Pure talent,” said GNL Zamba.

GNL Zamba added that every time Big Tril raps, he hears it all while other rappers wrap their punch lines under forced American accents while Tril moves with a Ugandan swag without even trying too hard.

Zamba says this at a time when some people came out and said that Big Tril’s club banger attracted most people’s attention only by luck.

“Maybe in 2020 we can talk about how Big Tril got lucky and stop with the how hard he worked fake deep talk…,” @revnickk.

On that basis, Big Tril also responded on those claims through his Twitter page informing them of how he sacrificed and taught himself music production.

“I sacrificed three years of my life, taught myself music production, perfected my craft, prayed and spent countless hours in the studio and finally paid off. Instead of talking about me please go concentrate on your craft too. We create our luck,” Big Tril responded.

Therefore Zamba says that the management of Tril is one with the Baboon forest. And also advises all those who hate him to let him have a global hit, as it’s just a reward for all his hard work and dedication.

“It is Striker Entertainment for now but Baboon Forest too. Shout outs to his management,” GNL added.

Big Tril continues to be popular as his single Parte after Parte crosses border after border and gets endorsements from various international celebrities, from Mavin music mogul Don Jazzy, Burna Boy to hip hop superstars Offset and Cardi B. 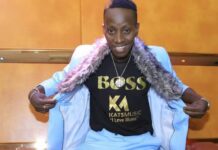