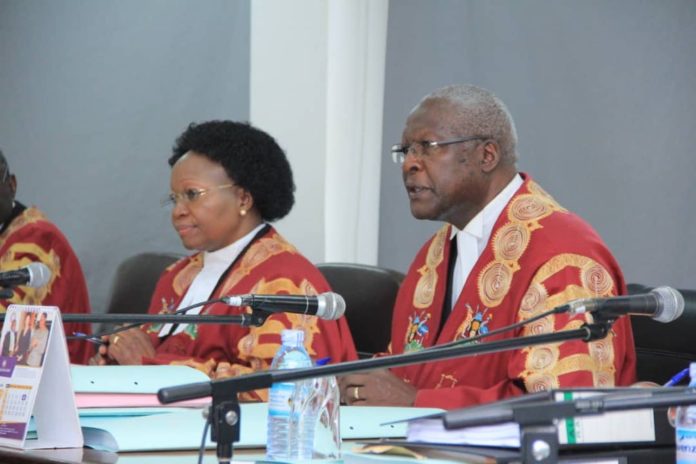 The Supreme Court has validated the ruling of the Constitutional Court of lifting the presidential age limit and quashed the age limit appeal.

The Supreme Court on Thursday nullified the appeal challenging the presidential age limit Amendment, which the Constitutional Court upheld in December 2018.

In a 4-3 verdict, a panel of seven Judges from the Supreme Court in Kampala quashed the age limit appeal in a judgement delivered one after another.

In their ruling they said that, the Speaker did not smuggle the bill onto the order paper as petitioners say. In addition, they said lack of decorum in the August House turned them violent. And that Justified the invitation of the security personals deployed at parliament to control these violent parliamentarians.

Relatedly, they said that cancellation of the current parliament and local councils term of office by the Constitutional Court still stands.

Chief Justice, Bart Katureebe, in his final verdict on the matter said that; “The decision of the Constitutional Court is upheld and each party will bear their costs.”

But at first, Katureebe excused himself that he cannot deliver the judgement due health complications which cannot allow him to read. And as a result he entrusted his powers to Justice Eldad Mwagushya, who delivered the final orders of the court.

“In the course of preparing this judgement, I seem to have developed a medical condition that requires a surgical procedure, and under strict orders of Doctors I cannot read.”

In their argument, they said that the process that led to the Constitutional Amendment (No.2) Bill, 2017, that allowed the removal of the presidential age limit was unlawfully proceeded.

They continued to say that there was no justifiable command ushering the bill that was approved in December 2017, by president Yoweri Kaguta Museveni.

“Because of the defectiveness of the certificate of compliance issued by parliament ‘confirming’ that the procedural requirement of amendment has been followed. I hereby declare the entire Constitutional Amendment Act of 2017 to be null and void,” Justice Tibatemwa said.

Tibatemwa in her ruling also said that Court can’t continue to sever a document that is illegal. She proceeded to say that: “the act of parliament was misconceived and unconstitutional since they compromised majority of Ugandans,” a statement that excited petitioners.

“Act that take us back to the sad history of Uganda cannot be maintained in the Constitution. I hereby allow this appeal with each party bearing its own costs since this is a public interest matter,” Tibatemwa added.

Justice Paul Mugamba, in his ruling stated that heavy deployment of military troops during the discussion of the age limit bill was not necessary. And at that time, many MPs who contradicted the bill faced assault.

“The chilling effect of this invasion of the military in parliament cannot be underestimated.”

Mugamba after laying down his statement pronounced that the process of passing the law was illegal and he stood in support of the appeal.

Addressing Journalists shortly after the verdict, Mwesigwa Rukutana, Deputy Attorney General, said that the ruling justifies Uganda’s respect on the rule of law.

Mwesigwa adds that even if court had ruled in favour of petitioners, government would still honour the Court’s resolutions.

However, on the issue of heavy security deployment at parliament during the age limit discussions that saw excessive force applied on those who responded negatively to the Amendment, leaving many with sustained injuries, Rukutana says that MPs only need to revise their behaviours.

Petitioners react after the verdict

Winnie Kizza, former Opposition Leader in parliament said that they are going to sit down and decide to go to the East African Court of Justice. Because Justices have betrayed their own country.

“It is very sad to know our own Justices are the ones that have betrayed their own country.”

“That’s very absurd, we decry what has happened, we regret what has happened here, but we are confident and firm that Ugandans will take ultimate decision on this matter,” Erias Lukwago, Kampala lord mayor and one of the petitioners said.

“We have been able to show a dictator that you are no longer strong as we thought. Because this dictator in 2016, had nine judges unanimous, today we have been able to show that actually you have only one difference. And the one who is making a difference, God has already punished him, he’s already blind and cannot even read. So, God is seeing, our ancestors are seeing,” lawyer Male Mabirizi said.

Following the Supreme Court ruling, president Museveni who will be above 75 years of age by 2021 will now be allowed to stand for presidency without any limitation.

The panel of judges who made the ruling stated that the passing of the bill strictly followed the stated guidelines.

Justice Kenneth Kakuru disagreed with the judgement noting that the process of Amending the Constitution in particular was fawn, because most of the MPs did not make consultations from the people they lead.

However, after the ruling, city lawyer Male Mabirizi, six members from the opposition parties and the Uganda Law society petitioned Supreme Court on 16 grounds noting errors in the Constitutional Court Judgement.

Mabirizi in this regard said the judges did not reason out why they failed to summon Rebecca Kadaga, Speaker of Parliament to testify on the event and conduct of MPs during the age limit discussions.

In their appeal, the three parties wanted Supreme Court to nullify the Constitutional Amendment deals because they infringed the right to a free and fair hearing.