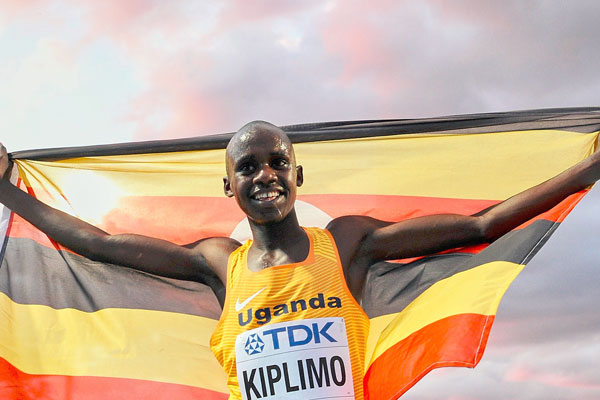 Ugandan junior long distance runner Jacob Kiplimo settled for second place as Kenyan, Rhonex Kipruto cruised to the world U-20 10,000m title. Kipruto clocked 27:21.08 and shattered both his previous best of 27:49.6 and the championships record of 27:25.23 set by his compatriot Rodgers Chumo a couple of years ago to claim Gold at Ratina Stadium in Tampere, Finland.

Pre-race favorite Kiplimo crossed the finish line 19 seconds later and settled for Silver. Right from gun, Kiplimo and Kipruto took to the front with the Ugandan, who won bronze two years ago, bringing the field through the first kilometer in 2:50.41.

Jacob Kiplimo stayed at the front for the next several laps, reaching two kilometres in 5:40.68 and three in 8:25.42 with Kipruto and compatriot Solomon Boit following closely. The two took turns with the lead over the next few laps but the pace slowed.

Kipruto upped the tempo and opened a 10-metre lead with nine laps left, a lead he extended to some 30 meters two laps later. Jacob Kiplimo managed to defend the gap over the ensuing three laps, but seemed to hit a wall with one kilometre to go, as Kipruto extended his lead to more than half the distance of the home straight.

Boit faded in the final few laps, and Ethiopian Berihu Aregawi, who was shadowing the Kenyan, sped by over final lap to win bronze in a personal best of 27:48.41.

Another Ugandan in the race Victor Kiplangat finished sixth in a personal best of 28:42.77.

Meanwhile, in the women’s 5000m, Uganda Sarah Chelengat was 9 seconds short of the bronze after finishing fourth in a race Beatrice Chebet claimed gold in a personal best time of 15:30.77 for Kenya’s first ever win in the category at the championship.

Ethiopians Ejgayehu Taye and Girmawit Gebrzihair finished second and third in personal bests of 15:30.87 and 15:34.01 respectively.