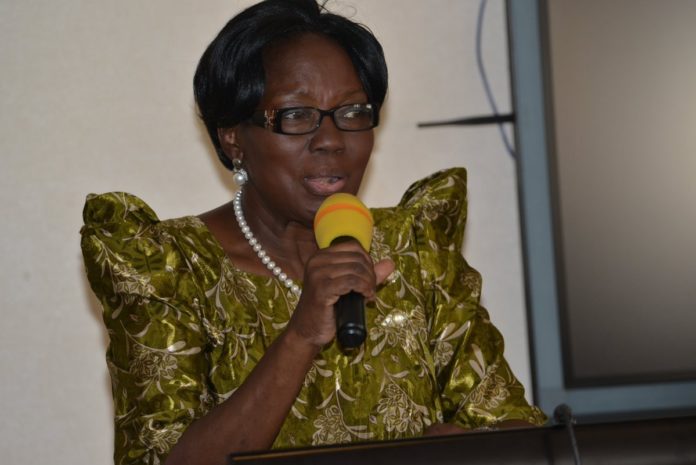 In a bid to lessen the rising cases of human trafficking in Uganda, Speaker of Parliament Hon Rebecca Kadaga says government should take over the labour exportation sector.

Speaker Kadaga says private investors should be stopped from conducting the business to enable government monitor its people who are taken out as labourers.

Kadaga raised the concern while opening a workshop at Golden Talip Hotel on “Modern Slavery” earlier on Wednesday 15 2019. It was attended by various stakeholders to discuss the proposed Anti-Slavery Bill, 2018.

Continuing, Kadaga said that it’s hard for government to help Ugandans who are enslaved in foreign countries simply because the Uganda foreign missions do not have them in records.

Kadaga adds that she once requested Ugandans working in Dubai to register with the Uganda embassy in Dubai but they refused.

“They don’t want to associate with the government. So, how do I know how to rescue you if you don’t want to register with the Uganda mission? You can’t even budget for them. But we are trying to allocate some money to that cause,” Kadaga said.

She however, argued the public to be conscious as regards to human trafficking cases which are on increase even within Uganda. Kadaga said in 2018 local council of Nakawa division helped her rescue five children kept in a house for 3 months just because they were security conscious.

“These children were trafficked from Ngora. Their rescue was possible because the chairperson was vigilant, he was curious about movement of food in and out of a certain house in his village.”

Kadaga also pointed out the difficulty they face in trying to regulate human trafficking, saying that some of these labour export companies are owned by government officials making it hard for them to monitor Ugandans going out as labourers.

She says they have been fighting it for about 20yrs but all their attempts went unsuccessful.

“It is annoying that a number of Ministers in this government own labour export companies, so you cannot expect them to supervise a sector where they have an interest.”

“Karamoja is becoming a key source of either trafficked or enslaved people, Soroti is becoming more of a holding place and a transit centre, so as Mbale, Tororo, Busia district.”

Ariko however, argued government to steer up the fight against human trafficking, set up rules and regulations on other slavery forms that includes forced labour, Servitude and forced commercial sexual exploitation.

The Anti-Slavery Bill 2018, seeks to repeal the prevention of trafficking in persons Act, 2009 and make provision for the prohibition of slavery, servitude and forced or compulsory labour, commercial sexual exploitation, debt bondage, human organ trafficking and also provide for the repatriation and compensation of victims of the offenses under this Act.