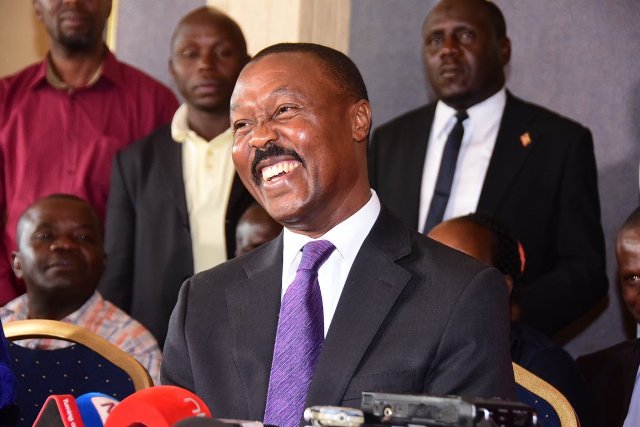 The Alliance for National Transformation (ANT) party has Worked closely with the police in all their meeting they have been organising something other political players have failed to adopt.

Police spokesperson Fred Enanga, clearly stated that police will be working hand in hand with the organisers to ensure that all arrangements goes on well.

“The territorial police at Kampala Metropolitan headquarters is working with the organisers from the Alliance for National Transformation who formerly notified it, their plans to hold the promoters meeting on the 21 of May 2019, at Nsambya and thereafter launch the Alliance for National Transformation as a political party on the 22rd of May 2019 at Serena Conference Centre.”

Muntu’s new political party was verified and a certificate of registration issued by the Electoral Commission on the 25 of April 2019.

However, police have applauded Alliance for National Transformation for cooperating with them and responding positively to the stated guidelines.

“The Alliance for National Transformation, gave us ample time to process their request, they were able to inform us the purpose of their meetings and the launch that’s going to take place. They indicated a numbery of participants and even showed us the invitations of the persons who were coming in these two places. We were able to consult together, we went and carried out a security assessment at both Nsambya and Serena together with them and agreed on the numbery of ushers, Stuarts who are supposed to be helping out,” Enanga said.

The newly appointed People Power spokesperson Joel Ssenyonyi, said that this action is a move by government to create divisions among opposition parties.

“What police seems to be doing now, of course being used by the state is to create divisions within the opposition. So, allow Gen Mugisha Muntu, don’t allow Hon Kyagulanyi to hold his concerts, you know don’t allow Dr Kizza Besigye and others such things! fighting with the opposition and so we are very sensitive about that.”

Nevertheless, Sulaiman Kakaire, the Alliance for National Transformation spokesperson said they will continue observing the stated rules and regulations’ in all the gatherings they will arrange ahead of the 2021 general elections.

“The Alliance we have shared at every stage of the activity whichever activity we have engaged in. every stage we have taken as political party we engage the police and we have cooperated with them at all types where need be.”

Alliance for National Transformation has opened up a new chapter in the political arena, of maintaining a close relationship with the police contrary to other opposition political players who are always fighting with police whenever they hold meetings characterised with teargas arrests and bullets.