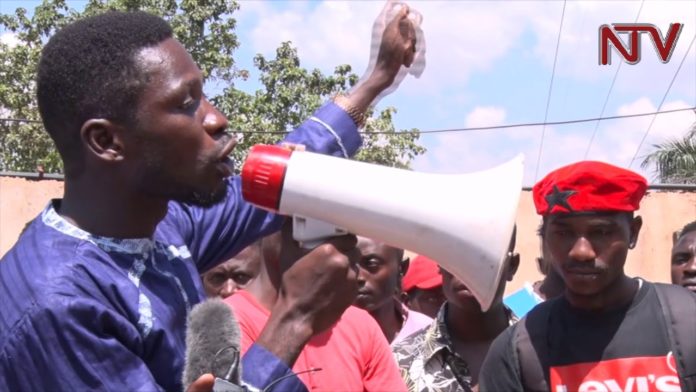 Robert Kyagulanyi Ssentamu also best known as Bobi wine, Kyadondo East Member of Parliament and the residents of the ghetto zones residents of Mulimira, Kisenyi and old Kira road who faced the evictions threat at the disputed land in Kamyokya Kampala, have mixed reactions as regards to the matter.

One of the group want to negotiate with the landlord, another prefer settling matters legally, yet others say they will fight for their land one on one. If at all a forceful eviction is enforced.

Residents of the disputed land were given seven days’ time to leave, in a notification issued by the land lord Pearl Hope Investment, on 11 March 2019 affecting over 400 people.

Pearl Hope Investment limited, is the landlord of about 26-acre land located in Kamyoka a Kampala suburb.

Kyadondo East Member of Parliament Robert Kyagulanyi Ssentamu, is one of the victims awaiting eviction and following the notice, Bobi Wine met leaders and residents of the slum to discuss the matter.

Bobi Wine was born and raised in Kamyokya, where he established Ssemakokiro plaza as well. This plaza houses his music recording studio.

The Land Owner filed a case of trespass on his land by Bobi Wine and other residents. But according to Bobi Wine he will not permit Pearl Hope Investment to evict them unlawfully, he says he wants legal intervention into the matter.

Bobi Wine says these disputes are political aiming at failing his political ambitions, but he’s ready to carry on negotiations with the land lord.

“It’s mainly targeting me; in this ghetto I am a bit different from my fellow residents because when I bought the Kibanja interests I went ahead to buy the land interest from the owner. However, to me I fill these people are being unfairly targeted.”

Benjamin Katana, Bobi Wine’s Lawyer, on Monday said that they have all the evidence indicating Bobi Wine’s legality over the contested land which he has also developed.

The land Act under section 32(8) provides for a period of six months, before an eviction can be implemented.