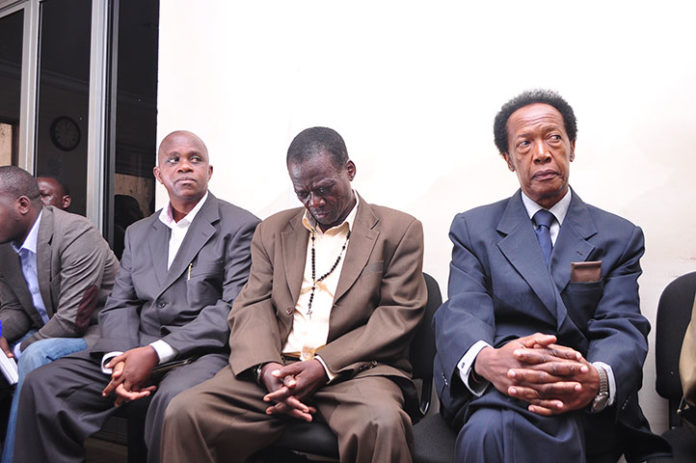 The Anti – Corruption court has for the second time convicted the 3 public ministry officials and handed more years in jail.

The 3 officials and Lawyer Kasango were convicted on 21 counts which include; conspiring to steal 15.4bnmeant to cover costs of retrenched 6000 workers in damages and pension, forgery of Judicial documents, conspiracy to commit a felony, diversion of public funds among others.

According to court, evidence presented showed that documents presented before court were forged.

Hand writing experts say the 3 officials plus Bob Kasango forged a court order, certificate of taxation and certificate of costs directing the Attorney General to pay Hall and Partners the money that were meant for pension and reward of more than 639,000 pensioners.

All the evidence provided to court indicates that, there were irregularities in the money paid to Bob Kasango through his law firm Hall and Partners.

Hall and Partners is a law firm that belong to Bob Kasango who claimed to have offered legal support in 1998 to 6,000 workers.

Lawyer Kasango is accused of collecting money meant for pensioners via his law firm account without representing pensioners in the case against the Attorney General; he was also accused of theft and forging two judicial documents to steal 15.4bn pension money.

However, Kasango defended himself saying that he was given the contested documents to pick money from government so court should not charge him against forgery.

But Judge Tibulya said that; Kasango was aware that the documents he used to collect the money were forged and also the 3 officials knew that Kasango was not to be given any money as court costs since it was not budgeted for.

Obey and Kunsa offered a defence stating that they signed the documents which lead the diversion of funds without reading them but their defence fell on deaf ears of Justice Margaret Tibulya who said that as seniors before signing any document they would read it first.

Also Justice Tibulya neglected the lawyer’s plea on the health condition of his clients and proceeded to pronounce the final judgement.

John Isabirye lawyer to the convicted said that they are going to appeal to court against the ruling.

“Obviously, we have already talked to them and they are dissatisfied with the conviction and of course when we look at the sentences they are extremely outrageous. So, we already have instructions to appeal,” Isabirye observed.

Relatedly, the lawyers are also contesting the 300bn to be com Shillings to be compensated by their clients to government. They say only Bob Kasango benefited from the 15.4bnshs awarded to him.

The three ministry officials Jimmy Lwamafa, Christopher Obey and Stephen Kiwanuka Kunsa are already serving their punishment at Luzira prison of 7yrs for Lwamafa, 5yrs for Kunsa and 10yrs for Obey sentenced earlier by the Anti- Corruption judge Lawrence Kidudu on 10 counts of causing financial loss, abuse of office, conspiracy to defraud and diversion of public funds in 2016.