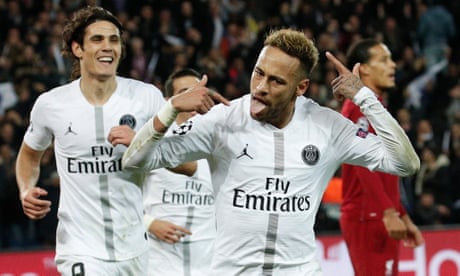 Liverpool will have to win their last champions league game against Napoli by two goals to progress to the knock out stage after losing in Paris 2 -1 .in a night where last year’s champions finalist lacked confidence it was going to be very difficult to PSG side that had quality players like Neymar and Mbappe.

PSG did not have to wait to breakthrough, Bernat shot past the stranded Alisson from 10 yards after the ball had been prodded away from Mbappe.

With Liverpool struggling for confidence and the home side attacking forward, Georginio Wijnaldum was booked for fouling Mbappe but Neymar’s free kick headed by Marquinhos.

Milner then passed the ball back to Mohamed Salah on the edge of the area as Liverpool looked for a response, but his effort drifted tamely wide.

After 24 minutes, Verratti went into the book for fouling Joe Gomez before, with the half-hour approaching, Liverpool created a flicker of danger when Roberto Firmino’s cross was poked away.

Moments later, PSG threatened again when Neymar found Mbappe down the left and his low ball in was inches away from Cavani.

Gomez was booked for fouling Neymar after 33 minutes, and things got far worse for the visitors three minutes later when PSG put themselves firmly in control of the game

Messi provided an assist for Gerard Pique to score the second

They now have 13 points at the top of table.  While PSV will finish bottom. Captain Luuk de Jong scored a late for the home side as they matched FC Barcelona for much of the game at the Philips Stadion. Psv theartened Barcelona in the first 45 minutes of the game and also missed a number of chances they hint woodwork three times in the first half alone and missed a number of other chances. In a bright start, PSV forward Gaston Pereiro latched onto a poor pass from ratikic