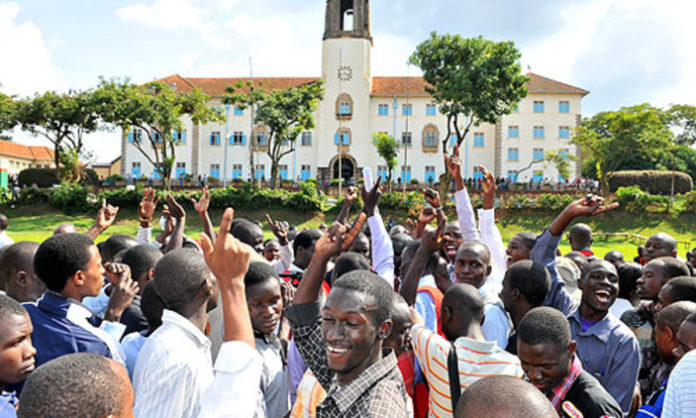 Makerere University Guild Council have threatened to mobilize a students’ strike if the university management does not respond to their injustices in 48 hours and also warned security officers to stay away from campus if peace is to carry the day.

According to security, their stay at Makerere is a result of the ongoing staff sit down strike that started on Friday the 18th of Jan 2019 and their aim is maintain peace at the institution.

During an emergency Guild Council meeting at the University premises on Wednesday, 23 January 2019, students demanded that management and MUASA resolve their issues immediately for student’s to have their lectures.

They also issued a warning to the University management against unnecessary suspensions to students during this time.

Kamunyu was suspended last week by Prof Banabas Nawangwe the University Vice Chancellor accusing him of making false accusations, using indecent language, intimidation of University officials, strikes to undermine the University and continued incitement with intention to cause disobedience.

He is also said to have engaged other staffs in illegal activities and fuelling them to confuse University activities.

Makerere staff also demand reinstatement of other suspended members including Joseph Kalema (MASA), Bennet Magara (MASA) while Thomas Tayebwa and Bruce Kabasa deleted from the University Council claiming that they were illegally appointed.

They also want Ruth’s appointment on the University Council to represent MASA. These members were among the 45 Makerere staff of which 32 were fired and 13 suspended by the University Vice Chancellor following indiscipline claims in December 2018.

And as a result the Academic Staff resolved to lay down their tools until the head of their association returns. This has not gone well with the students who awaited to have their timetables issued for immediate learning purposes.

Students claim management use media platforms to release false statements that lectures are going on which is untrue. According to students, this has been incorporated with the University management’s advancement of new electoral regulations and as a result it compelled the students’ Guild Council to hold an emergency meeting to come up with a lasting resolution.

However, students from different colleges confirmed that lecture rooms were closed. Some were of a view not to interfere with wrangles between MUASA and Management but others said it affects them directly hence calling for direct involvement into the matter.

“At Makerere there are no lectures going on,” one of the students said.

The new electoral regulations or nominations and campaigns state that any aspiring candidate for position of Guild president shall pay a non- refundable nomination fee of 200.000shs, 100.000shs & 50.000shs respectively to a designated account.

Students trashed the new regulations stating that they will not pay for a leadership that is voluntary.

Students also claim to have the students Constitution as a law to governs them because these new regulations override the mandate to student’s guild to manage their own affairs.

After getting input from the student leaders under the 84th students’ guild council, the president Salim, commonly known as Papa said that they are not going to accept the new electoral regulations.

“We have reported it to the Management and on Sat we are ready to start lectures and that is what we all demand for, and in the next 48hrs if lectures have not resumed, if that document have not been rebuilt then we are going to announce industry action.”

Meanwhile, the grievances of students range from 15% increment on tuition that has not been accounted for, to arbitrary suspensions.

And to some students they attribute the crisis to divisionism in students’ leadership but also conquering with the idea of Amending the Constitution and make electoral reforms but through fair mechanisms.