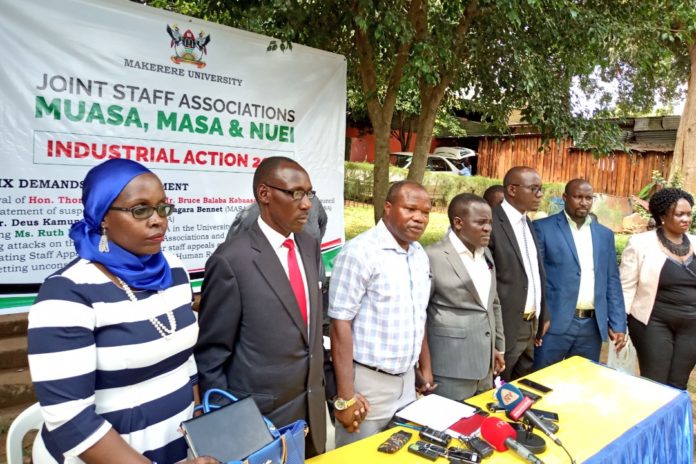 Following unselective suspensions and dismissal of several staff at Makerere University by the Vice Chancellor Prof Barnabas Nawangwe, public attention has since been attracted.

Dr. Samuel Byamoki, worker’s MP has led the University staff to petition the speaker of parliament Hon Rebecca Kadaga over the matter.

Dr Byamoki said Makerere University should be investigated in the public probe.

“At the end their prayer would be that legislature intervenes in their case through the select committee.”

However, the differences between the University Staff and Administration are characterised by the recently dismissed Academic Staff, Dr. Deus Kamunyu the MUASA chairperson.

Kamunyu is one of the recently dismissed staff after being accused of inciting staff and indiscipline at the backdrop of the disagreements between Staff Associations and the University Administration.

And as a result, Makerere Dons want parliament to conduct an independent tribunal to investigate Vice Chancellor’s conduct including illegal recruitment and contract termination of staffs.

“We requested the council to allow the staff abused tribunal to effectively deal with the staff that has been punched out of the institution as soon as possible and within the law, 45 days,” Dr Kamunyu stating.

“We think this has now reached the pinnacle at Makerere University, that is why it’s attracting national attention. But it’s everywhere, where you find a Council is in place but it’s using arbitrary committees set outside the structures to victimise people. And so, we said because of this, and since the rot has reached the top, action must be taken. That is what we are demanding,” Isaac Magoola General Secretary University Union speaking.

“We also demand that the suspended and dismissed staff be reinstated,” Magoola added.

Relatedly, they also want the Committee to attend to all staffs who were either dismissed or suspended irregularly regardless of whether they were something committed or not they should be attended to, such that they get the base of this matter.

In addition, they also want the select committee of parliament or the committee on education to conduct a public hearing of the unethical behaviours at all public universities in the same way it has been on bank of Uganda.

“Of course we all agree that so much is going on in that very prestigious University, all of us are alumni to that university, so, it’s a matter of concern that certainly we are going to look into the issue.”

The recently fired staff in question are allegedly accused of committing offences like computer misuse, incitement with intent to cause disobedience and undermine administration. Acts that bring the Administration and officials into disrepute, intimidation of University officials using abusive or insulting language, insubordination and making false statements.