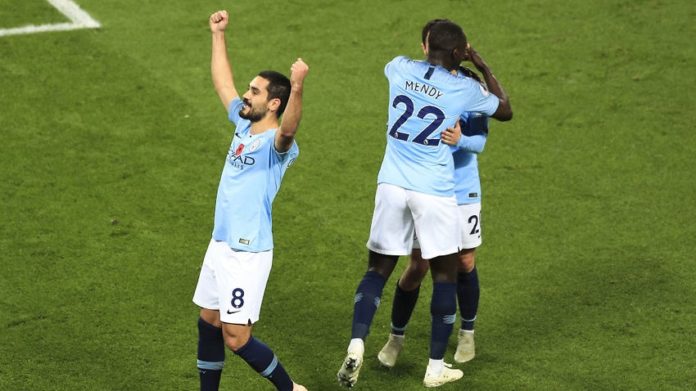 This win by Manchester City surely killed Manchester United hopes of competing for the league title. Man united made a fight for it but City always appeared a class above Manchester city setting at a 12-point gap behind united and two ahead of Liverpool.

Pep Guardiola made one change from the previous league game preferring Riyad Mahrez to Leroy Sané, Alexis Sánchez could also count himself unlucky to be dropped for similar reasons as Jose made four changes from the win at Bournemouth. Marcus Rashford replaced Sánchez and Jesse Lingard, Marouane Fellaini and Ander Herrera came in for Juan Mata, Fred and Paul Pogba, who failed a late fitness test

City soon began dominating paly in peps style. First a raking Fernandinho pass was collected by Bernardo Silva and he let go with a 30-yard shot that narrowly missed to David de Gea’

Twelve minutes in. Ashley Young failed to tackle David Silva, who turned the ball around the corner to Raheem Sterling. His cross passed in front of De Gea and Luke Shaw allowed Bernardo Silva to play the ball back across goal, where David Silva was waiting to crash home for a seventh time this season.

The encounter was unfolding inside Etihad Stadium, the atmosphere as vibrant as would be hoped for the derby. By the midway point of the half United had, at last, gone some way to show their opponents and the crowd. Fellaini, Rashford, Herrera, Shaw, Lingard and Anthony Martial were starting to combine and an effort from the latter crashed off John Stones to leave him down. This new-found composure was showed by a good left-foot pass from Fellaini to Young along the right as City were pinned back: hardly a regular experience for them at this venue.

Barcelona lost a home league game for the first time in two years as the Spanish champions were beaten by Real Betis’s fantastic display at the Nou Camp.

Junior Firpo gave Betis a deserved lead after 20 minutes, before veteran Joaquin made it two before the break.

Lionel Messi scored a penalty in reply but a Marc-Andre ter Stegen error moments after Giovani lo Celso add a third for Betis.

Arturo Vidal’s tap-in gave Barca hope, but Sergio Canales got the away side’s fourth, before a Messi consolation. Ernesto Valverde’s side remain at the top of La Liga, one point ahead of Sevilla, Atletico Madrid and Alaves.

The hosts had Ivan Rakitic sent off for a second yellow card with eight minutes left when trailing 3-2 and were powerless to match a determined  Betis side, despite Messi’s two goals on his return from a fractured arm suffered three weeks ago.

Barca’s previous home league defeat came on 10 September 2016, when they lost 2-1 to Alaves.

Betis had lost on their past eight visits to the Nou Camp and had not won there for more than 20 years.

Juve wins in Milan as Higuain is sent off

Juventus bounced back from their first defeat of the season in style at the San Siro. After losing to Manchester United in the Champions League during the week, Juve secured a  2-0 victory at top with at Milan. Mandzukic opened the scoring for the hosts in the first half, heading home from a cross into the middle.

Cristiano Ronaldo doubled the advantage late on, before former Juve striker Gonzalo Higuain was sent off for Milan to compound their bad day. Higuain was given a second yellow for arguing with the official, before having a pop at Giorgio Chiellini, insinuating that he demanded the striker is sent off.

Borussia Dortmund beat Bayern Munich 3-2 in a thrilling Der Klassiker at the Westfalenstadion on Saturday evening.

Bayern twice led through Robert Lewandowski, only for Marco Reus to change the reigning Bundesliga champions on each occasion. Paco Alcacer came off the bench to score the winner for the home side and keep Dortmund four points clear of Borussia Monchengladbach at the top of the table, and open up a seven-point gap over third-placed Bayern.

Reus had the first real opening of the game in the 10th minute, and should have given Dortmund the lead. He was clean through with only Manuel Neuer to beat, but he could only fire tamely at the Germany