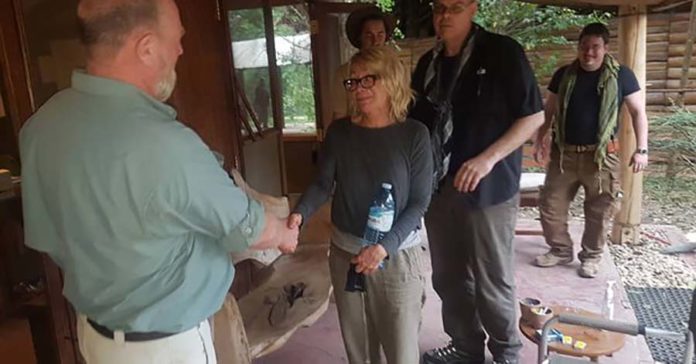 It now emerges that Uganda government paid a ransom of $300,000 to the kidnappers of American tourist, Kimberly Sue Endicott and her tour guide Jean Paul Mirenge. Earlier in a media briefing, police have disregarded ransom deals with the kidnappers. But Godfrey Kiwanda Ssuubi, the State Minister for Tourism came out and admitted the payment.

Kiwanda says; the money was given to save lives because lives of these persons became a priority that pushed the state to deliver money that the kidnappers had demanded.

At the press conference inside police headquarters at Naguru Kampala, Fred Enanga, the police spokesperson made updates on the incident denying ransom transfer.

“The victim who had been held captive, together with her safari guide Jean Paul Mirenge, were released because first of all the increasing threats of the usual force after the armed captors knew, they are being hotly pursued by the joint team of security agencies. And at this stage, I would like to inform you that the operation is still ongoing.”

“As police we don’t do ransom. And I am telling you that this was a high risk operation. And we had identified the hide out, the pressure was there of the last resort moving like I had indicated in the statement that there was an increasing threat of the usual force by our elite team that we had on ground. So, if there was any other arrangement of the ransom either with the family or the camp manager then it’s something we will let you to explore. But the police and the government of Uganda, we don’t do ransom and we can never encourage that.”

This message was later challenged by Minister Kiwanda who confirmed that the ransom was paid to save lives of the duos.

“First of all whatever these people demanded for was paid, who paid, who have ever, our first priority was to make sure that these people are safe. The initial payment I don’t think it should be turned here into a very big issue.”

Kiwanda says government was at cross roads and the only option was to give out this amount of money to save lives.

“The money had to be taken. Because money is money if it’s paid on said of Congo or this side, what we wanted is to make sure these people are safe.”

Kiwanda’s statement left many wondering why police had denied ransom payment or giving out details on what emerged out of this operation as it was.

He however, refrained from giving details of the operations arguing that it may jeopardise the hunt of these suspected kidnappers.

“But what I can confirm to Ugandans that everything was done to save the lives of our people. Of course, also to save our name, and we’ve done everything, so I don’t think this will be a time of blaming who does what that. The thing is that we saved the lives and there were very many tricks that were involved.”

Government had earlier tried a plan of delivering medicines to the American tourist and use this to track the kidnappers but the plan was rejected by the kidnappers after learning the it.

Following negotiations made, the kidnappers demanded $30,000 to be delivered by a woman. It’s said the woman sat on a boda boda and rode towards Democratic Republic of Congo. Midway, she was told to stop and there came another boda from Congo searched the woman thoroughly well before picking the money.

And this brought relief after the victims were back to safety.

Elizabeth Karungi, Woman MP Kanungu District, says the kidnap is not an isolated case as it’s claimed by the relevant authorities.

“It has been really beating my understanding why my people have been disappearing almost every week. People disappear in Kanungu, people disappear in Kasese, they are taken away by these I don’t how I can call them whether hooligans or rebels or whatever who are in Congo. They take our people, request for money, request for cows, request for goats, we report these issues to the relevant authorities and people are not released. So far we have lost more than 11 people.”

However, in a tweet president Museveni assured tourists that the country is safe for them while his American counterpart Donald Trump said “Uganda must find the kidnappers of the American Tourist and his guide before people feels safe in going there,” also in a tweet.

Uganda Wild Life Authority says it’s an isolated case and assured tourists that Uganda is safe, they should keep coming and explore the Uganda’s beauty.

“One thing is clear, parks are safe and this safety there is a lot of input. From our selves we have a sizeable range of force that does the patrolling in the parks, they do intelligence work to detect potential crime and therefore there are specific areas where you make sure that you have rangers stationed.”

Now as a country we have a huge challenge to rise above especially with this top foreign exchange earners into our economy. It requires urgent attention so that we continue hosting visitors in our parks without any fear.