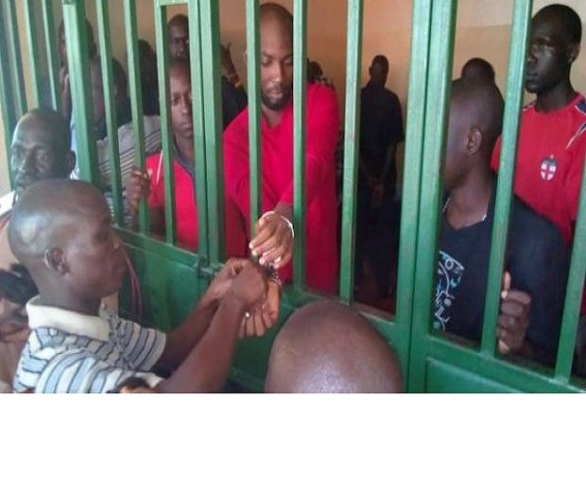 Two days after Popular vocalist and Singer Moses Ssekibogo Nakitijje also known as Mowzey Radio of the popular duo Radio and Weasel was laid to rest in Kagga, Nakawuka, his alleged tormentor and Killer Troy Wamala were arrested on Sunday night hiding in Kyengera. He is currently detained at Katwe police station.

After the picture of Troy surfaced all over Social media after  Radio’s fans and friends cried for justice, police managed to trace and arrested him. According to Wamala, he says was with Radio that night but he didn’t throw him to the flow. He further told the detectives at Katwe police station that he started when his name was mentioned among the suspects and his picture was circulating on social media.

But according to Mowzey Radio’s producer David Ebangit also known as Magic Washington told NBS on Monday morning that he saw Troy Wamala throwing Moze to the flow hence damaging his skull.

Producer Magic Washington, who is alleged to have been with Radio the night he was beaten, said;

“On the way out, towards the door of the club, this tall guy, Troy, came shouting ‘you have disrespected the owner of the bar’. He lifted him, hit his head down. I heard his head crack. My instincts were to first pick up Mowzey. His eyes had shut down. We drove Mowzey to Emmanuel Hospital and there was a bit of delay. We then requested for an ambulance to Nsambya hospital. From Nsambya we were referred to Case clinic because its ICU was full. I attended Mowzey’s burial but it’s unfortunate that some people think I was not there. I had a security team of about 15 people because I was told I was a key witness in this case. Moze Radio didn’t fight at all. This man Troy grabbed him and threw him down. The picture circulating is of the man who killed Radio. I can’t forget the face of the man who killed my brother. I asked Pamela to get Mowzey out of the bar four times. She didn’t enough to protect Mowzey because she is the one who invited us” embattled Washington told NBS TV.

BUT despite the words from Washington, Wamala has come out and denied all the allegations. Wamala aged 28 was arrested on Sunday in Kyengera on accusations that he is a key suspect in the murder of radio. After his arrest, the suspect told Katwe police station detectives

“I shared a table with Moze, Hassan Lukwago, George Egesa, Mowzey radio and Washington. An argument stated as radio anyone without for buying booze to get off the table”.

Moze’s death has even got more controversial after another person has been dragged in the case accused of having invited and killed Moze Radio, AK 47 and also tried to kill others. Her name is Pamela. This is not yet confirmed yet and singer  Eddy Kenzo has already come out claiming Pamella has never tried killing as many have put it on social media.