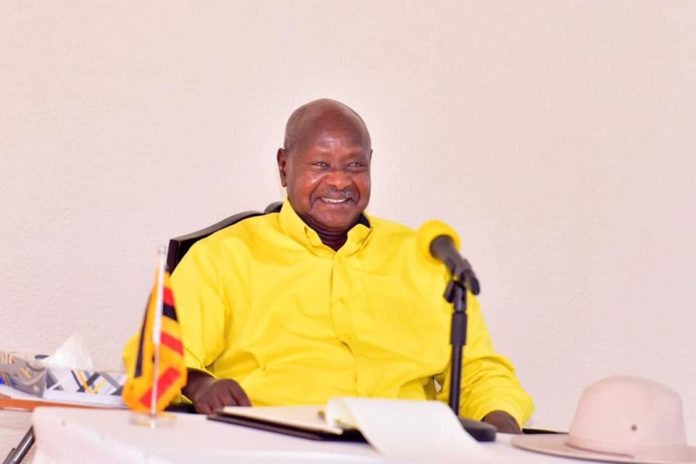 President Yoweri Kaguta Museveni sealed the deal to be the National Resistance Movement (NRM) sole candidate, a head of the 2021 general elections.

According to reports, legislators present at the ongoing retreat in Kyankwanzi, were filled up with excitement after their chairperson accepted the endorsement. A resolution that will be sealed during this year’s NRM National Executive Committee meeting.

Addressing the NRM caucus meeting on Monday afternoon in Kyankwanzi, president Museveni said he is ready to serve Ugandans, as he accepts to take on the mantle as NRM flag bearer for 2021.

He says it was “an opportunity to add more steps to our mission-driven journey to make our country sustainably invulnerable.”

“I am therefore, humbled by your confidence in me and since I am still very able, I’m sure together, we shall in the coming years finally deliver an economy that can sustainably deliver jobs to our young people,” Museveni added.

His acceptance comes a day after the NRM legislators in parliament endorsed him as the party’s sole candidate for the 2021 general elections.

This means there will be no internal competitions for the party’s presidential flag bearer for 2021.

The “sole candidature” motion was moved by the key recommendation the NRM CEC made during an earlier retreat at Chobe Safari Lodge in Nwoyo District, at the end of January.

Hellen Asamo, representative for people with disabilities in parliament, said earlier on Sunday that their party chairman should lead the NRM including the State in 2021 and beyond. She continued to say that Uganda needs president Museveni more today than in the past years, because of his excellent leadership skills, guidance as regards to politics and mentoring of NRM members.

In 2014 Ms Evelyn Anite, then youth MP for northern Uganda kneeled down when she was presenting a motion begging president Museveni to run as the party’s sole candidate in a related caucus meeting in Kyankwanzi.

Ms Asamo, however, disregarded claims that her purpose of moving the motion was to catch president Museveni’s eyes and later on get big position in government.

“It’s not my aspiration, I am a staunch member of the party and I am already a chair of the equal opportunities committee of parliament. As a person with disability, the president has done a lot for us and we did not do anything marginalised.”

According to reports from reliable sources from Kyankwanzi leadership training centre, where NRM parliamentary caucus are camped, there were 10 MPs who wanted to move the motion to endorse Museveni’s sole candidature hoping to be rewarded as it happened to Ms Anite in 2014.

But the party caucus resolved to have Ms Asamo, who wasn’t involved in the fight to move the motion. But she didn’t kneel down as Anite did.

NRM had made decision to block Mbabazi from challenging Museveni for the party flag bearer, in preparation for the 2016 presidential elections.

Mbabazi left the party and contested for presidency in 2016 vote, as an independent candidate, but unfortunately he lost the vote.

Today, there isn’t any terrifying threat to Museveni’s sole candidature.

However, Dr Sam Lyomoki, the Workers MP, just of recent expressed his intended plans to contest against Museveni for the NRM party flag bearer a head of 2021 presidential vote. And now Monday resolution seems to shut his dream.

Ms Asamo, said as regards to Lyomoki’s case he’s allowed to run for presidency, but not as NRM carder.

“Lyomoki can still come, people have choices, and if he’s has got people to push him he can go forward.”

Yesterday Dr Lyomoki, lashed out at the NRM caucus resolution saying it’s “nullity” reason being it was not in line with NRM Constitution.

Lyomoki insists he will avail himself before the NRM delegates conference which has power to appoint a flag bearer of the party.

“The caucus does not have the powers to decide on who will be the party flag bearer. This is a shame for president Museveni as a founder because he’s leading the NRM to a constitutional crisis. The truth is that I am going to stand in the National Conference, but if they block me from attending, the 20 million members will know It was a manipulation.”