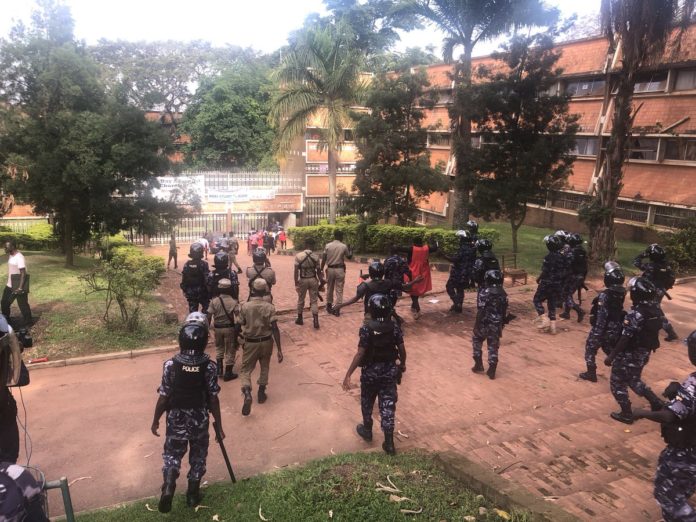 A senior lecturer at Makerere University school of social sciences, in the department of social works and social administration, Dr Ronald Luwangula, is nursing serious bruises after military soldiers who camped at Makerere battered him.

Dr Luwangula is now treated at Mengo Hospital in Kampala. He says on Thursday night soon after class, he landed on three military officers and seriously assaulted him leaving him with sustained injuries.

He says he moved towards his office at the school of social sciences which is 10 meters away from the classroom after the lecture.

But surprisingly, three military police soldiers attacked him and beat him using batons.

It’s reported that these soldiers were allegedly dispersing students at freedom square soon after completing their last guild election rally.

“I didn’t know that at that time the soldiers were scattering students who were from a rally at the freedom square,” Dr Luwangula said.

Luwangula says as he walked down stairs bleeding after sustaining serious injuries, some students and Senaca security Group guards came to his rescue and dropped him to the neighbouring clinic where he received first aid treatment before he was moved to Mengo Hospital in Kampala.

But at first Luwangula says he was taken to the University hospital but not one attended to him and later taken to the clinic.

He however, questions what these soldiers are still doing at Makerere and why the University management still keeps them around Campus.

“We request management to treat it as an occupational hazard and respond to his safety. We also request Council and management to embark on demilitarisation of University spaces and concentrate on active mentorship and training of our students in non- violent method.”

This arrived just days after Students leaders in February 2019, asked University management to withdraw military police and UPDF Army off the University premises.

Makerere University Guild Speaker, Mr Isaac Kwagala, said several complaints of harassment from staff members and students are piled up in his office, which have to be addressed immediately before the situation worsens.