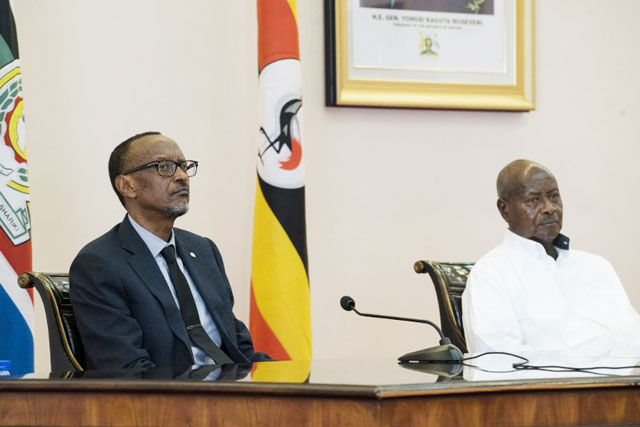 For several weeks now, President Museveni who has remained silent about the tension between Rwanda and Uganda over claims that Uganda supports rebels with an intention to take over power. Museveni has finally opened up on the bitter relationship with Rwanda, through a letter to President Paul Kagame, denying claims by Kigali that Kampala is supporting elements opposed to Rwanda.

Here is the full story;

According to the letter, Museveni said he only recently came into contact with a lady Charlotte Mukankusi, who admitted to being a member of the Rwanda National Congress (RNC), an organization that Kagame has said is hostile to Rwanda.

He writes: “Mukankusi told me that her husband Rutagarama had been killed by the agents of the Rwanda state…that she had been told by those very people [who killed her husband]. I then asked her what she wanted me to do about it because it was an internal matter. She told me she wanted me to know bad things that were happening in Rwanda. She told me she had joined RNC to resit Your Excellency’s government. She wanted us to support them.”

But Museveni told her he could not support her because the African Union is against countries interfering in the affairs of other countries.

“She was disappointed with my reply and I told her that I will inform you in writing,” he writes.

In the letter, Museveni also speaks about the Rwanda businessman Tribert Rujugiro, whom Kagame accuses of financially supporting rebels. Rwanda had demanded that the businessman be repatriated to Kigali for trial.

“Mr Rujugiro..seems to be resisting the idea of selling his businesses which he had accepted to do before. he countered the idea of giving money to Kayumba [Nyamwasa] by saying that even if he sells the factories in Uganda, he still has more lucrative factories in Angola, Dr Congo..a total of eight of them. He can send money from those,” Museveni writes.

He said if Rujugiro is still a problem to Rwanda, Uganda can use courts of law to try him on charges of terrorism and then his assets can be frozen.

Museveni’s reply comes two weeks after Kagame to a retreat of Rwanda leaders that Uganda had been provoked him to take certain actions including closing part of the Gatuna border.

“What remains to discuss with our brothers and sisters is the movement of people. We have Rwandans who go to Uganda who have been in prison, in their dozens, some of them are in military prison, others nobody knows where they are.”