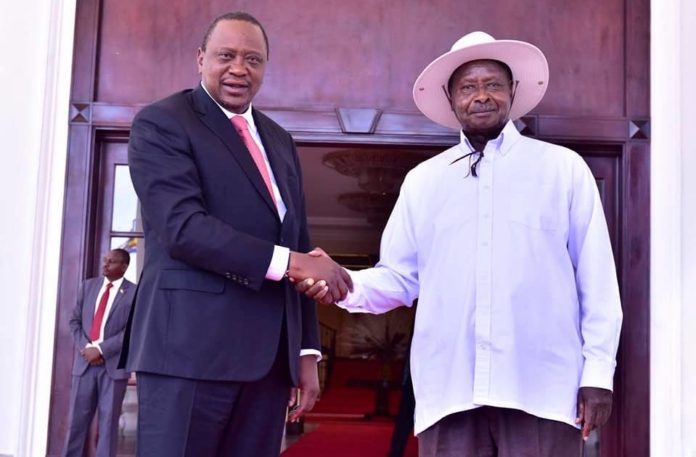 Kenyan president Uhuru Kenyatta is said to have paid a visit to Rwanda and later Uganda holding talks with president Paul Kagame and Yoweri Kaguta Museveni in the ongoing tensions between Uganda and Rwanda Katuna border.

The meeting between Kenyatta and Kagame, were held at Ngabiro the Rwanda Defence Forces combat training centre.

After meeting Kagame, Kenyatta left for Uganda for another private meeting with Museveni at State house Entebbe. State House Officials did not disclose what the talks were all about, but it’s assumed the discussion between the two leaders centred on the diplomatic wrangles between Uganda and Rwanda that resulted into the Katuna border closure.

For two weeks now, there has been tension at the points with Rwanda’s president blocking its citizens and cargo trucks from accessing Uganda.

Uganda has maintained they are in talks with Rwanda, and the stand-off will be resolved soon.

Earlier on Tuesday 5 of March 2019, Rwanda’s Foreign Affairs Minister, Richard Ssezibera, addressed journalists on causes of the tension between the two countries.

His first remark centred various meetings and correspondences in which the matter affecting the two countries have been discussed.

“The president met his colleague in Addis Ababa and discussed this for over a period of two days, they met in Entebbe State House, they discussed them, they exchanged envoys. Rwanda has written, these are in writing but we have not yet received a satisfactory answer, and we hopefully think this answer will come.”

“One- is this issue of Rwandans who continue to be arrested, harassed, tortured, incarcerated in Ugandans jails for reasons we don’t understand and in breach of international obligational.”

“It’s false that Uganda host any element fighting Rwanda. Rwanda knows it very well that it had been a matter of confidential communication at the highest level of the two countries. Uganda does not and cannot allow anyone to operate from its neighbour as it’s alleged.”

“It’s not true that Uganda arrests, tortures, harasses Rwandans. It’s well known that government of Uganda welcomes and maintains an open door policy for people for all nations including Rwandan wishing to visit the country,” in a tweeter post.