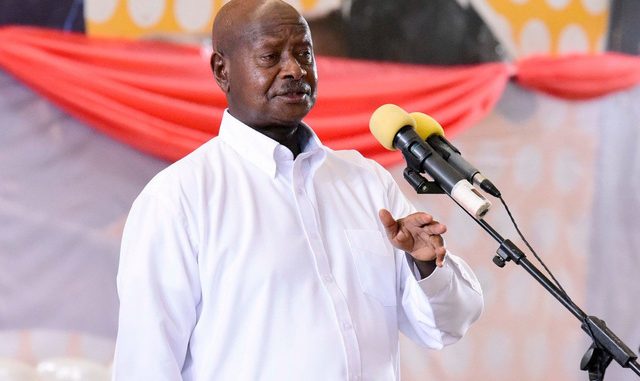 Yesterday President Kaguta Museveni came out and rubbished rumors that Crime preventers were established and controlled by the former Inspector General of Police Gen Edward Kale Kayihura but his own project as the overall leader of all militants in the country.

While addressing hundreds of crime preventers at Lugogo MTN Arena a reserve force for Uganda People’s Defence Forces with the role of protecting the country from external enemies.

Museveni revealed that the former Inspector General of police Kale Kayihura is not the brain behind crime preventers but one of the people who helped in the project.

“Kale Kayihura was an active cadre who implemented the aspect of our strategy actively and I congratulate him for responding” he said.

“Why I left you with the police is because you were dealing with the crime but in the end, you belong to the army. I now regard you as an army reserve for UPDF. My idea is to have a small army which is equipped but with a big reserve” said Museveni while addressing over 3000 crime preventers at Lugogo MTN Arena.

He further said that Crime preventers will no longer be under the police however under the UPDF army. He later on ordered the new crime preventers leaders to meet with CDF Gen David Muhoozi to talk about security issues.

Museveni told Crime preventers to live an exemplary life to the public and improve on their discipline.