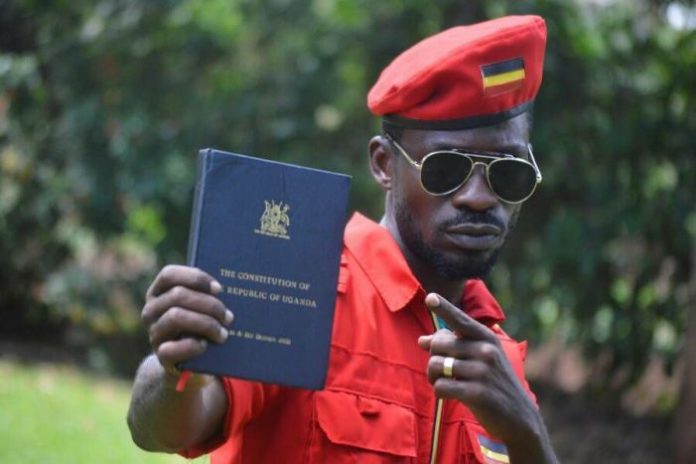 Dear Andrew Mwenda and all of you who think, the Ghetto President cannot be a good leader, you are wrong.  I believe he can be a better president than even the current president. Bobi Wine does not have to aspire to be President in order for him to lead a peaceful revolution against President Museveni. But even if he was to be President, he would make a good one. I will explain why.

Andrew Mwenda as usual gets it wrong trying to dismiss him and undermine him yet the man is giving them sleepless nights. This kind of Bobi Wine sensation has happened in Burkina Faso where music legend Karin Sarma mobilised people to end Dictator Blaise Campoure’s rule when he attempted to change the Constitution.

The talk of Bobi Wine having no ideological grounding is diversionary. Bobi Wine like any other person will evolve and get support from those who have the knowledge and skills. Bobi Wine understands life from personal experience and from a lay man’s perspective. Aspiring to improve people’s lives is enough ideology. It doesn’t need an idealistic 10 point programme that never matures after 33 years. That’s why alliances are there. You notice he is close to Col. Besigye, Gen. Mugisha Muntu and others.

For Museveni, when you have been in power for 33 years, you stop being human, you become super human and forget people’s struggles. Does Museveni for example after 33 years know what it means to buy fuel, pay bills, buy food for the family, pay medical bills, fees etc. Does he know what it means to take your wife to hospital and the nurses tell you we have nothing to use to deliver the baby?

Bobi Wine understands life from his personal struggle in the ghetto and he would aspire to address the challenges that an ordinary Ugandan faces. That’s an ideology. The job of running the economy is for technocrats at BoU and Ministry of Finance not the President.

At the moment, it’s very difficult to define the ideology of NRM and its leaders. The biggest ideology now is to retain political power under any circumstances even it means being brutal.

The reason Bobi Wine gets support is because there is an ideological vacuum. NRM is selling wolokoso ideology that the young generation cannot identify with. They preach one thing and do another.

The historical ideological position of NRM has long been abandoned. Kiiza Besigye adequately explains this in his paper which has since caused him all these problems including a threat of Court Martial.

You can call Bobi Wine whatever you like but he is clearly pulling the rug under Museveni’s feet. What kind of intellectual engages in petty insults?

If you noticed, Museveni in his recent social media activity has written the name Bobi Wine more than 100 times. Bobi Wine is giving Museveni sleepless nights. That’s why you Mwenda, a super intellectual has now diverted from your sweet melody Anti Besigye campaign to Bobi Wine because that’s where the prize is at the moment. The NRM propaganda team is in full drive with all sorts of ridiculous allegations: Bobi Wine is supported by LGBT…he is an agent of Western powers, if he is that means they have assessed and have seen him fit for the job.

To suggest that Bobi Wine supporters are riff raff is wrong. Time will prove you wrong. I know many of my friends, well-educated and polished people who may not necessarily support Bobi Wine for the Presidency but they see in him a messenger and a force that will either push Museveni to the tipping point or force him open up the debate on succession.

Right now, Museveni and NRM after amending the Constitution, after torturing people in Arua, they do not have a moral ground to claim a more superior ideology than Bobi Wine. They make Bobi Wine look like a heavenly messiah sent by God to redeem the country from a violent and intolerant regime.

Bobi Wine does not need to be like Museveni because anyone who will try being like Museveni is rejected by a large section of Ugandans. M7 is no longer a role model for good governance.

If Bobi is nothing as you claim, ignore him, don’t write about him, don’t try to kill him, don’t suppress his riff raff supporters and see what will happen.

Finally, the country does not operate on the single hand of the President, until Museveni suffocated all the institutions that should run a country, things were going okay with institutions doing the job.

When you, Mwenda, wrote about M7 personalizing the country and turning it into the monarchy, that’s exactly what you have forgotten.

In Uganda now, it’s very difficult to tell the difference between an intellectual and a fool/riffraff. The so called Intellectuals are the ones supporting everything that goes against standard practices of an ideal society where knowledge and freedoms are fundamental to the operations of a country.

When Museveni went to the bush and even when he came out, majority of the fighters were worse than riffraff, just a bunch of armed young people with no experience in governing a country, perhaps that’s why we have all these mistakes.

Finally, our country’s problem is not ideological, our problems are unemployment, misuse of public resources, patronage, impunity, and then leaders who overstay in power, those who get a running stomach when the issue of succession is brought up for discussion.

NOTE: These are not thoughts of Flash Uganda media but of an independent political analyst.