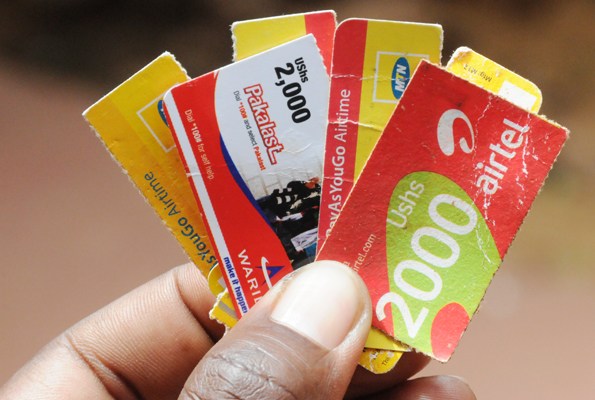 Members of Parliament sitting on the Information Communication Technology (ICT) committee have unanimously supported government’s move to ban airtime scratch cards. The MPs said that the comparative advantage of electronic recharge system outweighs the need for scratch cards and therefore the latter should be phased out.

During the interaction, UCC’s Mutabazi urged the MPs and general public to embrace electronic recharge for purposes of security, ease revenue collection and avoid health hazards like cancer resulting from use of scratch cards.

“There was a study showing that scratching airtime cards using fingers leads to cancer. So these scratch cards are cancerous. Remember they are not made here [in Uganda], so we are a dumping ground. Uganda should embrace opportunities offered by electronic recharge which will translate into cash-less economy,” he said adding that: “Electronic recharge has improved the process of tracing the vendors, customers who procure airtime electronically to curb crime. Above all, electronic recharge also improves revenue collection because it is easy for URA to track how much airtime has been sold,” Mutabazi said.

In March 2018, the sector players and UCC informed the public about the planned ban on scratch cards which took effect this month where consumers can buy airtime using mobile money, me to you and telecom agents through an electronic system among others. This ban caused an uproar among MPs on the floor of Parliament last week prompting Speaker Rebecca Kadaga to refer the matter to the committee.

“From our interaction with the telecoms, 98% of people were already using electronic recharge by the time we announced this ban. 54% of the vendors still had scratch cards and expected to sell it by July 30. This is a revolution and whether we like it or not it is the way to go because countries like DRC have already moved on,” Mutabazi added.

Unlike in plenary where MPs rejected the ban, the committee MPs support government’s initiative saying it was for the good of Ugandans.

“We are creating a lot of waste to this country. We are going to bring cancer here and then cry of cancer machine. This is the right thing to do. The same way I send mobile money to the constituency is the same way the person can transfer this money to airtime or data,” Benard Atiku (Ayivu County) said.

“The comparative advantage of electronic recharge system outweighs the need for scratch cards. We should go digital, it will help in security matters, but if UCC doesn’t check abuses, we will not achieve our goal,” Maracha East MP James Acidiri said.

Fort Portal Municipality MP Alex Ruhunda said that members of the public should desist from failing government laws which are for public good.

The Committee MPs however warned that this electronic recharge system is bound to fail if telecom companies do not improve on the network coverage which has been problematic especially in rural areas.

Committee chairperson Nyakecho feared that the introduction of electronic recharge system will deny people inclusive communication rights and suggested that both systems are left to run and phase out of scratch cards should be done slowly.