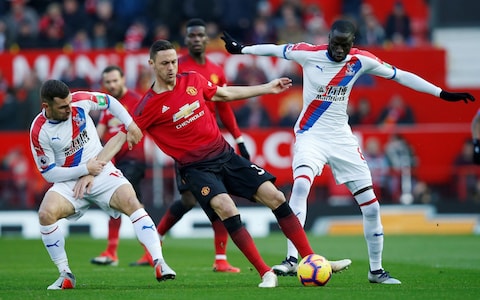 This result means United are seventh, 14 points off leaders Manchester City, while Palace are up to 15th, a point above the drop zone. Man united and palace had a number of chances during a goalless first half, with the best coming from the visitors. Returning to his former club, Wilfried Zaha saw a 25-yard effort saved by De Gea’s right-hand post, before Van Aanholt   right-footed shot, having been put through in acres of space by Zaha.

Lingard then forced a fine save from Wayne Hennessey at the other end, and Palace would have gone into the half ahead but for a fine decision from the assistant referee, flagging Kouyate offside having forced home Luka Milivojevic’s free-kick.

Ashley Young’s parried shot, while Kouyate had a shot from range tipped away by De Gea, only for Townsend to see his rebound blocked too.

JOSE Mourinho “We need to improve of course; I am disappointed with the performance. Again, you are right, it is not nice just to blame the team that is favourite in the game for not winning, it is also football to praise the opponent that came here and gave everything for that point. But we obviously have to do better. ”

ROY HODGSON “When we defended well enough to win the ball back and break out, we broke out good. I thought we had quite a few opportunities where I’m sure Jose on the other bench would have been a bit worried. I’m very proud of the team’s performance.”

Dangerous Eibar humiliated Real Madrid with an emphatic 3-0 win thanks to strikes from Gonzalo Escalante, Sergi Enrich and Kike Garcia.

Santiago Solari’s first game as permanent coach of Madrid ended in his first defeat, after four consecutive victories during his time as interim manager.

On-loan Barcelona defender Marc Cucurella played a part in each of Eibar’s goals as they tore apart Madrid’s fragile defence and the Basques would have added to their tally but for some fine saves by goalkeeper Thibaut Courtois.

Eibar’s first ever win over Real Madrid takes them provisionally seventh on 18 points, two behind struggling Real in sixth.

Bayern Munich’s poor Bundesliga season went from bad to worse on Saturday after a late collapse saw it draw 3-3 with Fortuna Duesseldorf, whose forward Dodi Lukebakio scored a hat trick.

Bayern coach Niko Kovac said he was “anything but happy” to see two late goals from second-from-bottom Duesseldorf, which last played Bayern in the Bundesliga back in 2013. “I simply can’t grasp how we failed to take the chances which we had, but what’s much worse is the way we defended all three of the goals we conceded,” he said. “It doesn’t matter then whether you’re facing a newly promoted team or a Champions League team. These mistakes get punished.”

Cristiano Ronaldo scored his 10th Juventus goal as they beat SPAL to remain unbeaten at the top of Serie A.

Douglas Costa hit the post, with Ronaldo missing an open goal from the rebound – although the Portuguese was offside so it would not have counted.

Juventus, champions for the past seven years, are nine points clear of Napoli – who have yet to play this weekend – after 12 wins and one draw from 13 games.

KCCA were a class above new league side with Patrick Kaddu, Timothy Awany, Allan Okello, Jackson Nunda and a brace from substitute Mike Mutyaba sealing the win.

Mike mutebi said that was a world class performance,” he told the press. “Everything you will require from the players they did,” added Mutebi who is accustomed to attacking players in the press.

Mike Mutebi described the performance in his side’s 6-1 win over Nyamityobora as perfect revealing he was duly satisfied.

KCCA regained top spot in the Uganda Premier League with 18 points, same as Vipers but with a superior goal difference after eight match days.